Everything About Fiction You Never Wanted to Know.
Jump to navigation Jump to search
/wiki/Iced Earthcreator 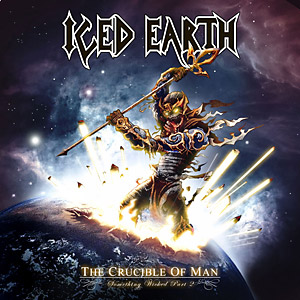 Iced Earth is a Heavy Metal band from the United States that was founded in 1984 by rhythm guitarist Jon Schaffer. Their music tends to be a combination of traditional heavy metal, thrash metal, and Power Metal. Many of their songs alternate between lighter passages and heavier, more aggressive parts. Many of their songs have dark fantasy-based themes and/or involve hell and damnation, although there are exceptions.

Iced Earth's line-up changes very frequently; Jon Schaffer is the only musician who has always been in the band. One of their singers, Matt Barlow, temporarily left the band in 2003, returning in 2008 for The Crucible of Man. While he was gone, Tim "Ripper" Owens (the Replacement Scrappy for Judas Priest) sang in Iced Earth. And the fans raged as much as the Priest fans did during their own Owens era.

Barlow quit again in early 2011, and his replacement is Stu Block from Into Eternity.

Jon Schaffer also has two side projects, Demons and Wizards, with Blind Guardian singer Hansi Kürsch, and Sons of Liberty.

They also have two songs in Brutal Legend's soundtrack.

Discography:
Iced Earth provides examples of the following tropes:
Retrieved from "https://allthetropes.org/w/index.php?title=Iced_Earth&oldid=1514827"
Categories:
Cookies help us deliver our services. By using our services, you agree to our use of cookies.