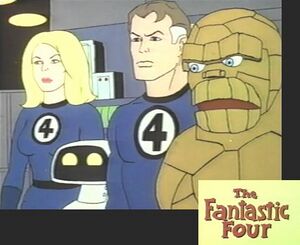 Mr. Fantastic, The Invisible Woman, The Thing and... the Robotic Operating Buddy?

A popular character is killed off or otherwise written out and replaced with a new character who fills their previous role. Regardless of what this new character is like, they're likely to end up with a Hatedom directed at them, just because they're not the old favourite. If he'd been there from the start, maybe the fans could have loved this new character, or at least respected him. But no—he's a replacement. He's not even a Suspiciously Similar Substitute who at least shared some character traits with the other guy, he's a totally different guy, and so every flaw—every trait that makes him not like the character the fans want him to be—drives them crazy with longing and disgust, and all they can do is get angrier and angrier.

In short, They Changed It, Now It Sucks, but with a main character. If lucky, he may be Rescued from the Scrappy Heap. Happens to all Anti Hero Substitutes that aren't portrayed as a regular villain in hero's costume.

(Of course, being a Replacement Scrappy does not preclude also being a regular Scrappy. It is entirely possible that the audience would have hated the character anyway.)

Examples of Replacement Scrappy include:

Retrieved from "https://allthetropes.org/w/index.php?title=Replacement_Scrappy&oldid=1899200"
Categories:
Cookies help us deliver our services. By using our services, you agree to our use of cookies.