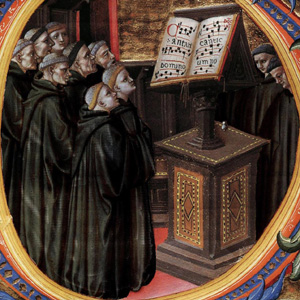 Somewhere over the past few centuries, Latin became the "ominous" language. Maybe it's the fact that it's the language of a once mighty civilization from over a thousand years ago. Maybe it's because it's also the traditional language of the Roman Catholic Church, and thus associated with divine power, spirituality, mystery, death, and Dark Age Europe. And from there it's only a hop, skip, and a jump to the idea of magic—often bad magic.[1] And then there's the music with which Latin is often associated—for example, the unique sounds of the Gregorian chant—which can sound decidedly sombre, even spooky to a modern ear. Latin choirs also have those distinctive "ooh", "aah" and "ooo" sounds, rising powerfully and falling dramatically.

So whenever you hear a choir singing in Latin, especially when paired with Orchestral Bombing, it means that something EPIC is going on (even when it's not). This association is so strong that this trope is extremely common in movie trailers; Hollywood will tell you that nothing says "watch this movie" more than choir chants in a language most viewers don't know, and that this is the way to give a scene that extra bit of ominous importance.

The actual meaning of the words is unimportant. They could be singing Latin nursery rhymes (or reading from a Roman phone book) for all we know; it's the sound that matters. Bonus points if the lyrics and/or tune are reminiscent of or outright stolen from Carl Orff's Carmina Burana, especially "O Fortuna". Most of the lyrics of Carmina Burana are secular poems from the Middle Ages about life, death, drinking, and sex that were often sung by the Medieval equivalent of frat boys—but they're in Latin, so that makes them awesome. The lyrics in "O Fortuna," however, are genuinely ominous. (Well, either that, or it's a college student complaining about how life isn't fair. Take your pick.) Another famous one is Dies Irae, whose lyrics are genuinely ominous.

This is apparently universal. It makes sense, given that Latin would be more or less as unrecognizable to Japanese or Swahili speaker as it would to an English speaker, although it would probably be recognizable to a romance language speaker.

Latin is probably the most familiar dead language due to its being the ancestor of modern Romance languages (even though English is a Germanic language, it still has a high proportion of Latin influence, mostly through French and science), and its prominence and impact on modern culture make it easy to fact-check. Nevertheless, Ancient Greek, Sanskrit, and others are sometimes used to similar effect. Eastern-style chanting is also having a surge in popularity, possibly due to the increase in stories featuring conflicts between Eastern and Western worlds. Creators that went to the trouble of inventing their own language for a work will likely find a way to feature it in this manner too. There's also a chance that the music only reminds one of ominous Latin chanting, opting to use "ooh", "aah", "ooo", and the like.

If one wants to be extremely pedantic, the vast majority of the examples stated here aren't actually chant at all, being settings of the text in musical instead of speech rhythms. Mind you, "Ominous Latin Singing" just doesn't have the same ring to it.[2]

If the creators are particularly clever, the chanting will include a Bilingual Bonus. Compare Cherubic Choir and the One-Woman Wail. See also Black Speech for the ear shattering version. Often a part of Orchestral Bombing and Religious Horror. May involve Ominous Pipe Organ. Comic versions might include Canis Latinicus instead. See also Creepy Children Singing, where creepy songs and nursery rhymes are played in the background to add tension and fear to a scene.

Plenty of the examples that follow have earned places on the Crowning Music of Awesome page in case you feel like listening to them.

Examples of Ominous Latin Chanting include:

Retrieved from "https://allthetropes.org/w/index.php?title=Ominous_Latin_Chanting&oldid=1948948"
Categories:
Cookies help us deliver our services. By using our services, you agree to our use of cookies.