Everything About Fiction You Never Wanted to Know.
Jump to navigation Jump to search
/wiki/Blind Guardiancreator 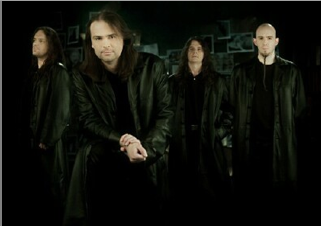 Blind Guardian is a German Heavy Metal band formed in 1987 (or in 1984 if you count its earlier incarnation, "Lucifer's Heritage"). Though their first few albums sounded a lot like Helloween (Kai Hansen, Helloween's former guitarist, actually guested on them), they quickly developed their own style and have become one of the most influential power metal bands. The band members are fans of Queen--one of their albums is actually called A Night at the Opera after the Queen album (itself named for a movie)--and their sound is strongly influenced by Queen. Their vocalist uses doubletracking in similar ways as Freddie Mercury. They are known for their epic sound, bombastic choruses, and pseudo-medieval/Celtic ballads. Many of their songs are based on fantasy and mythology.

You may know them as the band that did "Battlefield".

They now have an iPhone app devoted entirely to themselves.

Hansi Kürsch also has a side project called Demons and Wizards with Iced Earth's leader Jon Schaffer. He frequently guests on other speed/power/progressive metal bands' albums, including Ayreon's 01011001, Gamma Ray's "Land of the Free" and "Farewell", and Edguy's "Vain Glory Opera" and "Out Of Control".

An incomplete list of stories, events, and people that they have songs about: