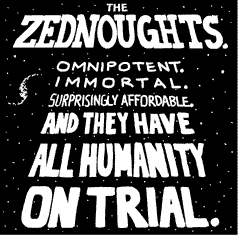 The Sufficiently Advanced Aliens are not pleased. The human race has been warring, polluting, nuclear-bombing, and not looking both ways before crossing the street. So now, they've come to put Humanity on Trial.

This usually involves plucking out a certain person or group of people - coincidentally, our protagonists - and putting them in a metaphorical court, to testify on behalf of the human race. Sometimes, there are individuals plucked from all ages of humanity's past (with the usual Time Travel cliches in effect).

Sometimes, it's stated that this is happening because we're on the brink of traveling out into space, or because we've just discovered nuclear power, but often the Powers That Be have just decided it is time.

Sometimes this will happen before humanity even knows said aliens exist and have yet to make first contact let alone any knowingly-hostile movements against them. Arguing "We didn't know any better", even if true, will only be used as further proof of our inherent arrogance and selfishness. When presented this way, it seems the "crime" we are guilty of is simply existing in the same universe while not being "civilized" enough for the alien's liking, and our lower-being status should be self-evident to the audience.

The hypocrisy of wiping out a fellow sapient species just because it suits them is rarely addressed, especially ironic if the aliens judge humans for a similar treatment of a weaker species. If it is, it's justified with Humans Are the Real Monsters, the only sentient race in the whole universe that does dirty things like cheating, lying, murdering, etc. The accusing aliens may have long ago overcome such behaviors, but they may even drop the bombshell that they never suffered from them in the first place, and have always been a utopian, perfect race that never as much as littered. The accuser also ignores the oddity of punishing an entire species for crimes against itself.

One way to avert the hypocrisy is to make the accuser species self-consciously no more moral than the humans on trial. They're not thinking of destroying us because of any particular ideology; they're thinking of destroying us because we are a potential threat. This can be treated with varying degrees of sympathy—you might be alarmed by the sudden appearance of strange ape-like beings in your backyard too, especially when at least a few of them can be proven to be violent and even fratricidal.

Sometimes an "act of self-sacrifice" by one of the protagonists will "prove" that humanity deserves to exist. If the aliens didn't know that this was possible, then they really Did Not Do the Research. And since this is the case more often then not, the whole "trial" device frequently gets a distinct tint of Plot Induced Stupidity.

If the plot has humanity not playing along and actually fighting back, then the accusers often downgrade to Scary Dogmatic Aliens. Otherwise, the verdict is usually that Humans Are Special (occasionally, the accusers actually suspected this all along, and just wanted to make sure we live up to our potential). Then again, considering all the criminally irresponsible "parenting" some Neglectful Precursors do, one wonders why they aren't on trial.

Compare to Outsourcing Fate, another case where The Powers That Be force certain individuals to represent the universe, but by actually putting them in charge.

Examples of Humanity on Trial include:

Retrieved from "https://allthetropes.org/w/index.php?title=Humanity_on_Trial&oldid=1510462"
Categories:
Cookies help us deliver our services. By using our services, you agree to our use of cookies.