Land of One City 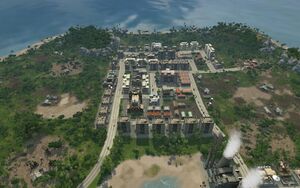 And you said a country can't have one city...

When a country is a city-state, i.e. the city is the country, or the other way around: the country has only one city.

Although this can be justified by the country being small (e.g. Monaco, Vatican City, Singapore), it is not justified when a country of this size has an economy the size of the US economy. This is a perfect opportunity to mix this trope with a hearty helping of City of Adventure. In Anime a city like this is usually a Utopia or Dystopia.

Note that the area with one city does not have to be a country, it can be a planet or county or etc...

Examples of Land of One City include: