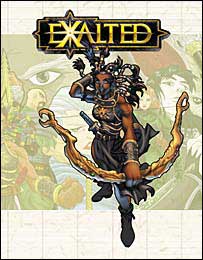 Welcome to Creation: here's your shovel.

Exalted is a 2001 tabletop RPG by White Wolf set in a mythic fantasy world known as Creation. The player characters are the Exalted, epic heroes and demigods blessed with cosmic power to reshape the world to their will. There are seven kinds of Exalted (potentially eight), each one chosen by a different god, titan, or cosmic force, and each one with a different role.

The Solar Exalted, the Lawgivers, Chosen by the Unconquered Sun, are celestial powerhouses who have the potential to be masters of all they put their mind to. Their powers grant superhuman skill and ability, from cutting down mountains with a single swordstroke to jumping into the clouds to seducing entire cities. In the First Age of the ancient past, the Lawgivers were rulers of the world.

The Lunar Exalted, Stewards of Creation, Chosen of Luna, are shapeshifting infiltrators and guardians of the world, boon companions and mates to the Solars. With powers that draw on mercurial shapeshifting and bestial power, the Stewards are the most adaptable and unpredictable of the Exalted.

The Terrestrial Exalted, the Dragon-Blooded, Chosen of the Five Elemental Dragons, are a race of superhuman soldiers who wield elemental powers. The Dynasts are the only Exalts who can pass their powers down to their children, and are at their best when cooperating in large groups.

The Sidereal Exalted, Viziers to the Lawgivers, Chosen of the Five Maidens, oversee Fate itself, and make sure that gigantic Creation-wrecking disasters do not come to pass. The Viziers wield bizarre and esoteric magic, weave fates, and are masters of cosmic kung-fu.

The Abyssal Exalted, the Deathknights, Chosen of Oblivion, are world-killing weapons destined to destroy Creation. Their masters are the Deathlords, ghostly servants of the dead Primordial deities, the Neverborn. The Deathknights are dark mirrors of the Solar Exalted, created by the Neverborn from Solar Exaltations they were able to capture after the Solars were overthrown. And if they dare to rebel, their lives start sucking. Really bad (This ranges from a minor supernatural marking...to the mortal they care most about dying. And Death isn't cheap in Exalted.).

The Infernal Exalted, the Green Sun Princes, Chosen of the Yozis, wield the power of the Primordial titans who created reality and were defeated by the Exalted at the dawn of history. Created from the Yozis' share of the stolen Solar Exaltations. Leaders of the Reclamation, the Yozis' plot to escape Malfeas (hell) and return to the world, the Green Sun Princes might free their masters—or they might become a new pantheon of titans all on their own. They get MUCH more leniency then their Abyssal counterparts from their Yozi masters, and it's entirely possible for them to slip the leash completely. And more often then not, they channel the powers of their corrupted Solar Exaltations into doing rather strange and awesome things, leading to the fan moniker "Rock Stars of Hell".

The Alchemical Exalted, Champions of the State, created by the self-exiled Primordial Autochthon, are machine demigods, forged from magical materials and imbued with the souls of heroes past. With Charms that take the form of magitech implants in their bodies, the Champions defend the mortals who live within the world-body of Autochthon from the corruption and blight that poisons the sick titan.

A potential eighth type, the Liminal Exalted, the Chernozem, have recently surfaced in the sourcebook Masters of Jade. These Exalted are, like the Abyssals, associated with the realms of the dead, and are said to be ghost hunters and sorceror-exorcists. Beyond that, little else is known.

The Exalted were created at the hands of the gods to overthrow the Primordials, the tyrannical cosmic superentities who created the world. They won, with the help of two traitor Primordials, Gaia and Autochthon, slaying some of the creators, and forcing the rest to surrender. The dead Primordials became the Neverborn, the nightmarish quiescent remains of entities for whom there is no beginning or end, and bound to sleep in the Underworld. Those who surrendered became the Yozis, crippled titans imprisoned within the hell called Malfeas, the world-body of their king. But the dead Neverborn cast a final curse on the Exalted, dooming them all to succumb to their own hubris and madness.

The Solar Exalted were made rulers of the world, but slowly fell to the Great Curse, becoming depraved and heartless monsters, mad with their own power. The Sidereal Exalted, blinded by the hubris of their own curse, conspired against the Solars. They incited the Dragon-Blooded to overthrow their masters in the bloody conflict of the Usurpation, and imprisoned the exaltations of the Solars, so that they could never again bless mortals with their power. The Dragon-Blooded reigned over Creation, but could not defend it from the infinite hordes of raksha, soul-eating faeries from beyond Creation, and the plots of the Deathlords, the ghosts of dead Solars in service of the Neverborn. Almost all Creation was destroyed, swallowed up into chaos as the raksha invaded and the Great Contagion engineered by the Deathlords wiped out nearly all life.

The chaos ended when one Dragon-Blood activated an ancient superweapon of the Solar Exalted, saving Creation and uniting it behind her. She would become the Scarlet Empress, founding a Realm that would span most of Creation. But now, the peace she claimed is falling apart. The Scarlet Empress has vanished. The raksha still creep across the borders of undefended Creation. And now, the Yozis and Neverborn have cooperated to free the imprisoned Solar Exaltations, stealing half of them to twist into their own dark champions. Harbingers of slaughter and entropy now stalk the land, while the champions of Hell work behind the scenes to free their masters. And into the midst of all this, the Solar Exalted have returned.

This backstory would be bleak, forbidding, and generally depressing in any other setting, but the basic premise of Exalted is that you are a Hero. A Big Damn Hero in a universe where Heroes Matter, and in fact are endowed with power to equal the rulers of the world. The Rule of Cool is the order of the day, and there is nothing you cannot do if you put some effort into it. In fact, the setting-function of the Primordial War is intended to show you that, given time and effort, you can overturn the foundations of the world and define your own reality.

Has extensive character sheets in need of Wiki Magic.

Tropes used in Exalted include:

Ebon Dragon: Nyeee-he-he-he! Now, with the Green Sun Princes free, all you dorks are going to get it!
Other Yozi: Right...So, which one of us has been the most overly-demanding, cutthroat, and generally ill-tempered towards them?
Ebon Dragon: ....Shit.

and because people who love systems and theories put everything into sets of five and devise correspondences between them.