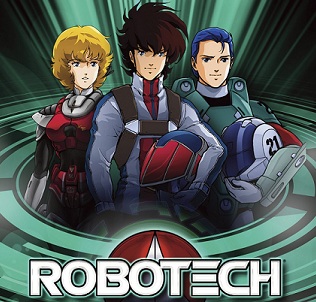 A cult anime series about three wars fought by Earth with alien technology against alien enemies over control of a powerful energy source. Initially a major success, its relatively adult story content is credited with introducing Western audiences to the sophisticated dramatic potential that Japanese animation had to offer.

This in turn led to a major rise in popularity of anime that was oriented towards the original Japanese productions unedited by American producers—somewhat ironic, because Robotech is actually a Cut and Paste Translation of three different anime series, edited together by Carl Macek of Harmony Gold, who wanted to bring the Japanese anime Super Dimension Fortress Macross to western television, but was unable to since it did not possess the sixty-five episodes needed for a syndication deal. Macek's solution was to tie Macross to two other unrelated series with similar elements and art styles, Super Dimension Cavalry Southern Cross, and Genesis Climber Mospeada, and to turn the whole thing into a multi-generational saga, using Macross's Protoculture—now retrofitted to be the fuel source behind the various technology used by the different races—as the uniting factor between each series.

The series was thus divided into three sagas, each based on its respective parent show and portraying a particular generation of characters. These are:

In addition to redubbed anime, several comics, novels, and games have attempted to tell the story, with varying levels of success, within and between the Robotech "generations". One of the most ambitious was The Sentinels, which chronicled the story of the Macross heroes as they go into space towards the Robotech Masters' homeworld in an attempt to stop any further wars. Naturally, they miss them, only to find the planet besieged by the second faction of the Invid, and meet a collection of alien races fighting to free themselves from Invid domination. Although the animated series fell apart after a few episodes were created, the story continued in comic, novel, and RPG form, each offering similar but varied takes on the story. Another stillborn project was Robotech: The Movie (a.k.a. Robotech: The Untold Story), which spliced footage from the show with scenes from the anime Megazone 23 in order to create a story set between the "Macross" and "Robotech Masters" sagas. Unlike The Sentinels, this project was completed, but its tepid reception during test airings caused Harmony Gold to shelf it, and it has never had a wide release inside the states.

One of the stranger aspects of all of this was how Harmony Gold was able to gain the US trademark for Macross simply by defending the rights to Robotech. At the time, Japan and the US did not have reciprocity for copyrights, and Bandai/Big West (the owners of Macross) had sublicensed the international distribution rights to Tatsunoko Production, who licensed all aspects of Macross except the Japanese model kits to Harmony Gold. Bandai also licensed several mecha designs to FASA for use in BattleTech, and they were incorporated and used in the miniatures game. Harmony Gold sued FASA for incorporating these designs, citing their license from Tatsunoko. The suit was successful, and the designs (now known as "The Unseen") were withdrawn. Big West subsequently successfully sued Tatsunoko, as their license to Macross was originally only to cover the original animation content of Macross, and not any derivative content based thereon.

The end result of the convoluted legal snarl

Consequently Harmony Gold's more recent sequels, most notably the completely original feature-length film Robotech: The Shadow Chronicles, are all set in or after the part of the Robotech timeline drawn from Mospeada.

The live-action rights were purchased by Sony in 2015, and as of summer 2017, a two-film Live Action Adaptation was in active development.

In 2019, Harmony Gold's license agreement with Tatsunoko to use Super Dimension Fortress Macross, Super Dimension Cavalry Southern Cross, and Genesis Climber Mospeada in Robotech was extended - the existing agreement will no longer end on March 14, 2021, but instead will continue "well into the future". As a side-effect, this means that Robotech might become available on Sony's streaming platform run by their subsidiary Funimation, according to Den of Geek.

Tropes used in Robotech include:

In actuality, they weren't supposed to be identical--it was just post-traumatic stress flashbacks on Scott/Stick's part coupled with the general similarity of faces in anime. When Harmony Gold was working on the Shadow Chronicles sequel, which was mostly a direct continuation of "New Generation", Mospeada writer Shinji Aramaki made the mistake clear (and pointed out that the whole idea was actually rather creepy). As a result, in Shadow Chronicles Ariel got a new voice actress, and suddenly insisted Scott stop calling her by his dead girlfriend's name (among other retcons).

Retrieved from "https://allthetropes.org/w/index.php?title=Robotech&oldid=1897428"
Categories:
Cookies help us deliver our services. By using our services, you agree to our use of cookies.