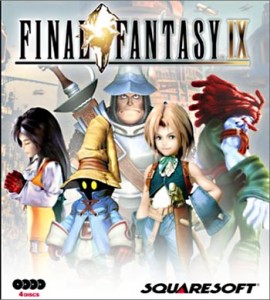 The ninth entry into the rib-rendingly popular Final Fantasy series.

Final Fantasy IX is a return to the series' roots and the classic Medieval European Fantasy worlds, after the more futuristic approach of Final Fantasy VII and Final Fantasy VIII. Both graphically and story-wise, it set a new standard for the games that followed it. Particularly, Final Fantasy IX is known for combining a sunny and light-hearted visual atmosphere with a very mature and thoughtful It Got Worse story. The game is additionally a celebration of Final Fantasy's origins, and contains many, many references to Square Soft's earliest few installments.

The main character is Kid Hero Zidane Tribal, a Loveable Rogue and Gentleman Thief with a dash of Chivalrous Pervert thrown in. He initially comes across as a simple kid whose goals in life seem limited to talking to girls, helping strangers and making a quick buck wherever he can. Having been adopted as a child by his band of thieves, he can't remember his earliest years or where he was born, but he doesn't let it bring him down. Zidane's story begins when he arrives at the Alexandria royal palace in hopes of kidnapping Princess Garnet by force, only for the princess to ask him to kidnap her... to which he gladly complies. He's happy to travel with the young woman and show her what the world is like.

And then he witnesses the death -- and even genocide -- of people from nearly every town he visits. It turns out there's a man (yes, man) named Kuja running around, who has his sights set on Princess Garnet's dormant summons... and will murder for them. Things get much, much worse in the second half of the story, when Zidane discovers the truth of his origins and his purpose on the planet. In the middle of the carefree, sunny atmosphere of the game, a plot slowly unfolds that explores the themes of genocide and What Measure Is a Non-Human?... in a thoroughly mature, respectful way.

The other main characters are:

The story focuses on the characters' efforts at self-discovery. Vivi must learn what he is and why he exists, as well as what this means for his life. Zidane must learn what he is as well, and how this has to do with The Man Behind the Man, Kuja, and his friend Vivi. Garnet must learn the truth about her mother, her own origins, and the nature of the eidolons that are her birthright. Steiner must learn what honor and duty truly mean, when those he is loyal to stand opposed to one another, and his loyalty may be invoked to betray itself.

Freya must learn what's truly important in life, and what it means to lose a loved one, and most of all, how and why to go on fighting. Quina must learn about being a true gourmand, by sampling flavors from all over the world. Eiko must learn that True Companions are more than just grabbing who you want for yourself, and that being on the losing end of a love triangle doesn't mean being alone. Amarant must learn that strength isn't the ability to crush one's foes, and that the most elusive power of all is a thing he may never even understand.

Final Fantasy IX was highly praised for being challenging, but extremely user-friendly. There is no penalty for leveling up, acquired skills can never be lost again, chocobos for encounter-free travel are very easy to come by, and optional scenes are just that: optional.

The plot too is much less of a Mind Screw than that of previous games, staying comfortably away from too much symbolism but still featuring some wonderfully surreal elements. Criticism of the game tends to focus on its "softer" art style, as well as the Character Focus on Garnet and Vivi to the exclusion of some other characters. As a whole, the game is seen as a very solid installment of the series, suited for hardcore gamers and new fans alike. The game was the least successful of the three offered on the original PlayStation, selling 5.3 million copies (Final Fantasy VIII sold over 8 million, and Final Fantasy VII over 10 million; Final Fantasy X would go on to sell 6.3 million) despite retailing for considerably less due to the imminent release of the PlayStation 2.

Additionally, Vivi is one of the most popular characters in Final Fantasy history. Maybe it has something to do with the fact that the ultimate woobie can destroy the biggest of monsters despite being nine years old. He had a somewhat one-dimensional cameo in Kingdom Hearts II as a result of his popularity.

This was the final Final Fantasy game of the Playstation cycle, and of the 20th century.

Retrieved from "https://allthetropes.org/w/index.php?title=Final_Fantasy_IX&oldid=1871646"
Categories:
Cookies help us deliver our services. By using our services, you agree to our use of cookies.