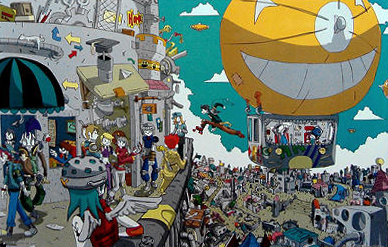 CCC City, The City of Opportunities

No need for Adventure Towns; all the excitement, glamour, outlandishness, and romance you could ever hope for just happens to be right in your own city. Unlike Tokyo and New York, this city is usually fictional.

The place to go to get easy Hero Insurance, judging by the massive collateral damage they can sustain.

There may be a Magnetic Plot Device hidden somewhere around here. Try to find one.

If regulars in the City of Adventure get annoyed with all the supernatural goings-on, then that's City of Weirdos.

See also Geographic Flexibility, New Neighbours as the Plot Demands, and Aliens in Cardiff. Contrast Nothing Exciting Ever Happens Here. Best served with a heaping of Land of One City or Capital City. May sometimes be accompanied by Where the Hell Is Springfield?.

The City is bound to be this.

Examples of City of Adventure include:

Retrieved from "https://allthetropes.org/w/index.php?title=City_of_Adventure&oldid=1764894"
Categories:
Cookies help us deliver our services. By using our services, you agree to our use of cookies.