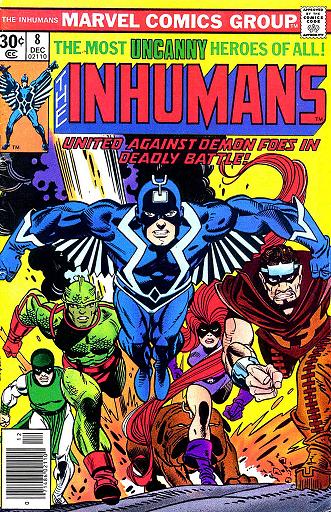 The Inhumans are a secret race of superhumans within the Marvel Universe. Although at first just background characters for the Fantastic Four, they've since become involved with other characters and have even starred in their own series occasionally.

Created by Stan Lee and Jack Kirby, the Inhumans were once primitive humans, though experiments performed on them long ago by the extraterrestrial Kree race (the same race that Captain Mar-Vell belongs to) gave them advanced intelligence. With time, The Kree forgot about their creations and they where left alone to form their own civilization, located on Attilan aka "The Great Refuge", a walled city on an island in the Atlantic sea. Eventually, they discovered a substance called "terrigen" that either gave people superpowers, a bizarre appearance, or both. They ended up basing their very culture on its use (and Genetic Engineering in general.)

However, the Inhumans are very xenophobic, and went as far as moving their entire city (with help from The Eternals, another hidden race) to the Himalayas to avoid being discovered by humans. They were found there by the Fantastic Four, and convinced to reveal themselves publicly, though their history of relations with the rest of the world is spotty. Later the city was moved to the "Blue Area of the Moon" (also created by the Kree) which has a breathable atmosphere.

The Inhumans are a monarchy whose Royal Family tends to be among their most powerful members; they also go out and kick butt when necessary. Their king is Black Bolt, who besides being a Flying Brick with electrical powers also has a voice that can literally destroy cities; he is thus forced to remain silent, communicating only by sign language (his wife, Medusa, often translates for him). Bolt's brother, Maximus, hates him out of envy and has tried to usurp the crown many times. At one point their cousin Crystal had a romantic relationship with Johnny Storm (The Human Torch of the Fantastic Four) and has even been a member of that group and of The Avengers. However she ended up marrying the mutant hero Quicksilver instead. They had a daughter, Luna, who has often been a target of villainous plans, what with being related not just to the Royal Inhumans but also to the X-Men's foe Magneto.

Other Royal family members include Karnak, a martial artist; Triton, a fish-man; and the satyr-like Gorgon, who can stomp really, really hard. They also have Lockjaw, a bulldog the size of a bull who has Teleportation powers and who may or may not be of human intelligence.

After the events of the Secret Invasion, the Inhumans renewed their ties with The Kree and lead the Kree Empire forces against the Shi'ar Empire in the War of Kings miniseries. Since the events of that series they have become a dominant power within the galaxy.

A recently revealed group called the Universal Inhumans was discovered based on four other races, Kymellians, Dire Wraiths, Centaurians and Badoons. They too were products of Kree experiments with their people but were brough together under the prophecy that Blackbolt would lead them.

The Inhumans provides examples of the following tropes:
Retrieved from "https://allthetropes.org/w/index.php?title=The_Inhumans&oldid=1765618"
Categories: