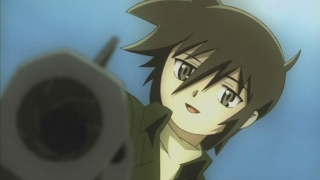 Kino can be very persuasive.

"The world is not beautiful, therefore it is."

Kino no Tabi, given the English name Kino's Journey: The Beautiful World, is a Light Novel series by Keiichi Sigsawa which was adapted into a fourteen-episode anime series and an OVA. It follows the travels of a teenager named Kino and a talking motorcycle named Hermes as they travel from country to country. Each land they visit contains unique and eccentric peoples and customs, sometimes helpful and sometimes dangerous.

Kino's world isn't kind, though, and any viewer faces slavery, cannibalism, execution, and homicide both justifiable and not for every flying machine, beautiful city or pastoral wilderness.

While Kino often refuses to make judgments on any country, a combination of a fast weapon draw, quick wits and a steadfast rule to stay in no country longer than three days and two nights all keep Kino going.

Tropes used in Kino's Journey include:

Hermes: (in response to Kino being forced to disarm to enter a country) This is still better than that time when you had to wear those weird clothes to get in.
Kino: ...I don't even want to think about that anymore.