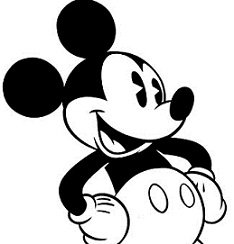 During the 1920s and going into the 1930s, animated characters tended to have eyes or pupils which were black and circular, but shaped like a pie that's had one slice removed from it. This was widespread until around the time color became the standard for most cartoons in the early 1940s, by which time the Inkblot Cartoon Style had fallen out of favor, and Western Animation as a whole had undergone significant Art Evolution.

When it shows up in modern media, it's usually as an homage or throwback. Parodies of the Inkblot Cartoon Style will almost always employ this along with Rubber Hose Limbs and the like.

See also Black Bead Eyes. Not to be confused with a slang term for being drunk.

Examples from The Golden Age of Animation:
Modern Examples and Homages

Retrieved from "https://allthetropes.org/w/index.php?title=Pie-Eyed&oldid=1802702"
Categories:
Cookies help us deliver our services. By using our services, you agree to our use of cookies.