Everything About Fiction You Never Wanted to Know.
(Redirected from Powerpuff Girls)
Jump to navigation Jump to search 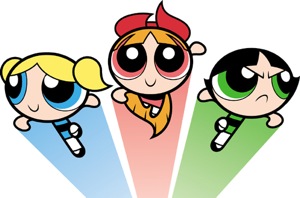 From left to right: Beauty, Brains, and Brawn

One of Cartoon Network's most popular original series, originally called "The Whoopass Girls" by creator Craig McCracken (they were created with "sugar, spice, everything nice," and a can of Whoopass) before it got picked up by the network during The Renaissance Age of Animation. The Powerpuff Girls centers around a Trio of little girls who fight crime in the fictional city of Townsville. These Artificial Human girls, who have no discernible fingers, toes, ears, or noses, were created when Professor Utonium accidentally added Chemical X to his mixture of sugar, spice and everything nice.

The series' heroines are Blossom, "commander and the leader," who often acts the Drill Sergeant Nasty; Bubbles, "the joy and the laughter," whose personality is very similar to that of her namesake from Jabberjaw (but not quite a Dumb Blonde), and Buttercup, "the toughest fighter," and the tomboyish Action Girl with a bad temper. Their simian Arch Enemy Mojo Jojo wears a helmet to cover his enlarged brain and speaks in a manner reminiscent of bad anime dubbing. Aside from the obvious Anime influences, most of the series' supporting characters are drawn in the style of Two Stupid Dogs (not surprisingly, as the creator of the show worked on that cartoon).

Warner Bros. released an animated feature, The Powerpuff Girls Movie, in 2002 (which sadly bombed at the theaters due to bad marketing from Warner Bros, though it does have the honor of being the only Cartoon Network series to have a theatrical movie). An Anime version, Demashita! Powerpuff Girls Z, hit the airwaves in Japan on July 1, 2006. There is also, off the record in the Web Comic world, a popular fancomic based off the series called Powerpuff Girls Doujinshi.

A TV reboot of the series was made in 2016, with many changes from the original series (setting, comedy, characters, even the main girls' voices were recast).

Tropes used in The Powerpuff Girls include:

Retrieved from "https://allthetropes.org/w/index.php?title=The_Powerpuff_Girls&oldid=1930886"
Categories:
Cookies help us deliver our services. By using our services, you agree to our use of cookies.