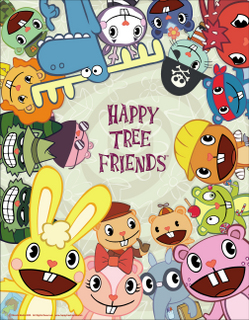 Now where did I put my tool box?

Happy Tree Friends (1999-present) is a series of web-based (and later televised) animated shorts. It is one of the most prominent among series in wide circulation that Crosses the Line Twice, since it's designed to horrify and gross out people to such extremes that we laugh. The series is about the misadventures of a gang of Ridiculously Cute Critters who live in a bright, happy, Sick Sad World bent on making them suffer as much as possible before the sweet release of death takes away the pain.

After you pick up your jaw from the floor, you'll be laughing your guts out (not literally, though the show does do that a few times) -- and subsequently lose all faith in humanity and compassion for your fellow man in the process. It doesn't help that the Sickeningly Sweet characters and setting so perfectly emulate a number of the most annoying children's shows ever (they even have Care Bears-esque hearts for noses!) or that the poor critters are endlessly resurrected between episodes to die in new ways that even Kenny would wince at.

This show provides grisly examples of:
Retrieved from "https://allthetropes.org/w/index.php?title=Happy_Tree_Friends&oldid=1690780"
Categories:
Cookies help us deliver our services. By using our services, you agree to our use of cookies.