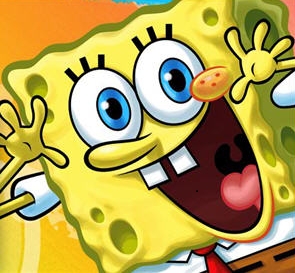 A Nickelodeon Animated Series about a highly energetic sea sponge who lives in a pineapple under the sea. Absorbent and yellow and porous is he. And if nautical nonsense be something you- ok, you probably get it.

SpongeBob SquarePants is the tenth entry in the Nicktoons series of cartoons, and is easily the most popular and iconic of them all. It is about the eponymous sea sponge, who is shaped like a kitchen sponge and is extremely optimistic. He works at the local Krusty Krab restaurant with his greedy boss Mr. Krabs and grumpy coworker Squidward Tentacles. He and his dimwitted best bud Patrick Star mistake Squidward for a close friend, unfortunately for him.

SpongeBob dreams of obtaining his boating license but fails every driving test he takes, usually causing mass destruction and endangering his teacher Mrs. Puff in the process. While he may be a reckless driver, SpongeBob is a fantastic fry cook who serves delicious Krabby Patty burgers to the townspeople of Bikini Bottom. He also has a knack for saving the day from the tiny villain Plankton and his talking computer sidekick Karen. They own a rival restaurant called the Chum Bucket and go to desperate lengths to steal the successful the Krabby Patty formula. As proven time and time again, failure is the only option for them.

Other friends include Gary, SpongeBob's smart pet snail who communicates by meowing like a cat; Pearl, Mr. Krabs' teenage daughter who is a gigantic sperm whale; and Sandy Cheeks, SpongeBob's Texas-accented squirrel friend who lives in an underwater dome and ventures forth wearing a bubble-helmet diving suit. The show is in a constant state of underwater bizarreness, frequently using the Rule of Funny (apparently a wood fire is possible underwater as long as you don't point it out). Funnily enough, series creator Stephen Hillenburg had a degree in marine biology - supposedly, he created a show about a sponge because he was really fed up with Small Taxonomy Pools.

The show, first broadcast in 1999, has since aired over 250 episodes and is currently in its thirteenth season, which premiered on October 22, 2020. It proved to be a huge success with both kids and adults. Kids enjoy the bright colors and silly characters, while adults appreciate its writing, wit, and a long list of parental bonuses and Getting Crap Past the Radar.