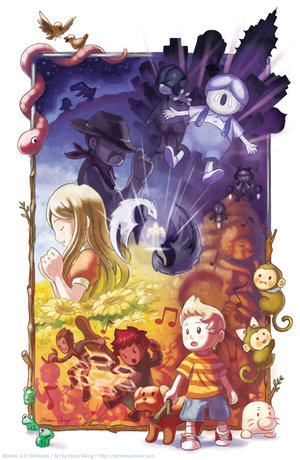 WELCOME TO MOTHER 3 WORLD! And what a welcome it is.

MOTHER 3 is a Japanese RPG starring an adolescent Heroic Mime Farm Boy from a Doomed Hometown and his dog, who join forces with a Lovable Rogue and a Tomboy Princess Black Magician Girl to fight a World-Conquering Evil Overlord and his Army of Brainwashed soldiers in a race to trigger the Seven Cosmic Keystones and Seal Away an Ultimate Evil which will bring about The End of the World as We Know It.

MOTHER 3 is a game about humankind's corruption of the natural world, the alienating effects of modern life on communities and families, the ethical treatment of animals, the folly of living vicariously in one's past, and brotherly love and rivalry.

MOTHER 3 is also the third (and apparently final) entry in Shigesato Itoi's MOTHER / EarthBound franchise; it continues the tradition of weird and quirky writing and gameplay which features deft employment of Mood Whiplash. Like prior games, MOTHER 3 centers on a young boy with psychic powers and his friends—but in this game, the time and setting are vastly different, and the threat to humanity is much more earthly than it was long ago.

Unlike its two predecessors, MOTHER 3 shifts focus several times between the main protagonist, his family, and the people (and sometimes animals!) who will become his allies—and true to its slogan, its story is regarded as the darkest (and most emotional) of the three games while retaining all of the silly charm which endeared its fans to begin with.

MOTHER 3 is notable for having begun life as a Nintendo64 game first—as part of the now-failed Nintendo 64DD add-on—before falling into Vaporware territory (its earliest development predated Duke Nukem Forever's, which didn't surpass its time in Development Hell until 2007). It resurfaced on the Game Boy Advance in 2006—but Nintendo has yet to (and likely never will) release the game outside of Japan despite vocal campaigns of support for an international release (Lucas eventually saw international recognition due to his inclusion in Super Smash Bros. Brawl).

Nintendo's stubbornness in refusing to release MOTHER 3 outside of Japan led to drastic measures—which, in this case, means an English-language Fan Translation which took years to complete. As it stands, said translation will likely be the only way to ever play MOTHER in a language that is not Japanese. The translation can be found at its dedicated homepage.

Itoi has stated on a number of occasions that he doesn't want to make another MOTHER game—these days, he'd "rather be the player". Cue the fangame sequel...

Tropes used in Mother 3 include:
Retrieved from "https://allthetropes.org/w/index.php?title=Mother_3&oldid=1958234"
Categories:
Cookies help us deliver our services. By using our services, you agree to our use of cookies.