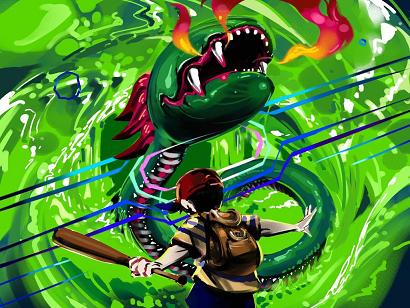 And then there's EarthBound.

EarthBound is a SNES game about Ness, a seemingly normal boy in Eagle Land who is awakened by a meteorite landing outside town late at night. The meteorite brings a bee (or not) from the future, who tells of its devastation at the hands of an indestructible being, Giygas -- a being Ness is destined to defeat. Ness' journey to stop Giygas will take him through time and space to meet the remainder of the Chosen Four (Paula, Jeff, and Poo) and collect the Eight Melodies for his Sound Stone to unite the power of the Earth as his own.

EarthBound is the second of a series of Japanese role playing games known as Mother, an experiment in storytelling in a different medium by Japanese essayist Shigesato Itoi. It's known as MOTHER 2: Gyiyg Strikes Back in Japan and serves as a loose sequel to MOTHER 1, since the setting of MOTHER 1 and MOTHER 2/EarthBound are essentially the same (an affectionate homage to 1950s America).

For a long time, EarthBound was the only game in the series to receive an official release in North America, as Nintendo had no plans for a North American release for Mother 3. MOTHER 1 was originally planned for North American release and was originally titled Earth Bound itself, but Nintendo of America scrapped release plans after work on its translation was completed, since the Super Nintendo had already launched (making it Nintendo's major focus). A prototype of the translation game surfaced years later in the hands of a collector; this ROM was dumped and eventually released as Earthbound Zero. A official translation version of the game (based in the Updated Rerelease for Game Boy Advance) was released in the Nintendo e-shop under the name Earthbound Beginnings. As of November 2021, there are still no plans for a North American release of Mother 3.

EarthBound is best known for its unusual gameplay: fantasy monster-slaying gives way to a modern-day urban setting, with slingshots, frying pans and baseball bats taking the place of swords, axes and magic staves. Rather than goblins and orcs and other fantasy creatures, Ness and his friends battle drunks, hippies, angry taxicabs, a cult dedicated to worshipping the color blue, and a giant circus tent. Most of its humor humor focuses on how the West is viewed by other countries (Japan in particular), with references to The Beatles and The Blues Brothers scattered throughout the game. The sheer level of Nightmare Fuel is perhaps more famous than the game's quirky humor; amongst the major sources of terror are a profoundly disturbing final dungeon and a final boss whose genuinely chilling Mind Screw horror has led to tons and tons of Memetic Mutation.

The North American release of EarthBound is notable for including an official Strategy Guide with every copy, despite costing as much as other games of its day (a sign of how much faith Nintendo had in the game's ability to sell). Due to an odd -- and failed -- advertising campaign, a simplistic visual style (considering this is when everyone was fawning over the advanced graphics of Donkey Kong Country), and a general lack of interest in RPGs (at the time), EarthBound didn't sell anywhere near enough copies to pay back Nintendo's significant advertising investment. In the intervening years, however, EarthBound has become a Cult Classic (to say the least) which is fondly remembered (and recommended) for its diverse soundtrack, unique gameplay, and undeniable charm -- aspects covered by The Happy Video Game Nerd's half-hour EarthBound review (which can be watched at Retroware TV or YouTube).

As a side note: Ness and Lucas (the protagonist of Mother 3) are probably best known to Western audiences via their appearances in the Super Smash Bros. games.

Tropes used in EarthBound include:
Retrieved from "https://allthetropes.org/w/index.php?title=EarthBound&oldid=1969346"
Categories:
Cookies help us deliver our services. By using our services, you agree to our use of cookies.