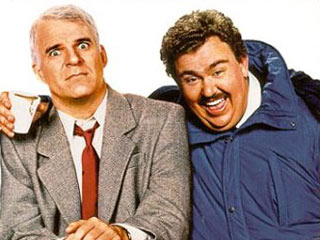 Uptight advertising executive Neal Page just wants to get home to Chicago for Thanksgiving Day. Unfortunately, every mode of transportation somehow fails him and he is stuck with Del Griffith, a traveling shower curtain ring salesman who won't shut up. Through delayed planes, broken down trains and burned out automobiles Neal and Del go from at each other's throats to friends.

The film is probably best known for the sole scene responsible for its R rating; in which Neal, after being abandoned in a rental car parking lot where the car he rented isn't there, is forced to walk three miles back to the airport, whereupon he goes on a tirade against the rental agent. But it is not so much said tirade, as the rental agent's response to it. Roger Ebert probably puts it best:

This film featured John Candy and Steve Martin in one of the best comedy performances of the 1980s. The film was directed by John Hughes, best known for teen angst films until that time.

Tropes used in Planes, Trains and Automobiles include:
Retrieved from "https://allthetropes.org/w/index.php?title=Planes,_Trains_and_Automobiles&oldid=1760996"
Categories:
Cookies help us deliver our services. By using our services, you agree to our use of cookies.