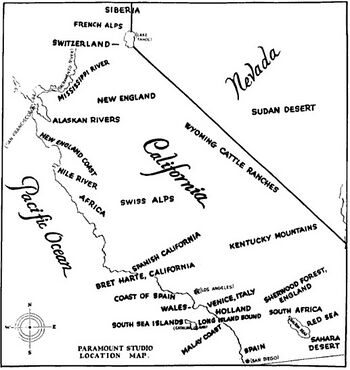 No matter where you go, there you are.

Any exotic foreign locale in a TV series is, due to budget or danger to the cast, likely to actually be somewhere in California, such as Kirk's Rock. For British sci-fi shows, it's "Quarry Doubling"—any desolate alien planet is usually a quarry (usually the BBC Quarry) within a couple of hours' drive from London—or Doubling for London.

One of the most famous examples of this is in Star Trek (and all subsequent series), in which every planet they land on looks exactly like the deserts of southern California or the redwood forests of Northern California, or the mountains of California (assuming it isn't a studio cyclorama instead). Oh, and from time to time the script might call for a beach. Any ideas?

There is also Vancouver Doubling that is helpful with vast mountain forests, dry deserts and oceans nearby; Toronto has doubled for urban areas such as New York City and Chicago more times than it has actually represented itself; and Utah has been Vulcan, Mars, and the Old West.

The main reason is that a production crew not only includes a cameraman, director and actors; there are usually at least two or three dozen people working on prepping a location, providing the appropriate light and transporting the equipment to film a scene. Moving everyone, especially on a weekly television budget, is sometimes implausible even if said location is willing to permit filming. Other times, the actual location is not an option for security and or political reasons.

Another time that this may be necessary is if the original location (and this is true especially for period pieces) no longer looks like what it did in story. While obviously it might be a bit difficult filming an ancient Rome in Rome itself as the city resembles Caeser's city in name only, even more recent cases might need new areas, the London of today is quite different from the London of Victorian times and the early part of the twentieth century (thanks in no small part to the Luftwaffe, so many East European locations are substituted instead.

Of course this can lead to Television Geography, as well as It's Always Spring. In many cases the average viewer may not be familiar with the location in question, but can end up bugging those viewers who have been or actually live in those locations.

This can have a very odd effect the first time one visits southern California. Upon seeing for the first time those scrub-covered hills and twisty roads, one gets a truly unearthly sense of deja vu. Have I been here before, you ask yourself? Then you realize that you have... on TV! For those who live in southern California, it is amusing to point out places one recognizes from TV shows. The most used location is Griffith Park, whose scrabble mountains can be seen in nearly every 1950's "jungle" movie, as well as M*A*S*H.

This can lead to The Mountains of Illinois when the setting is full of Critical Research Failures.

Contrast with Canada Does Not Exist, where the shooting location actually affects the storyline.

Examples of California Doubling include:

Retrieved from "https://allthetropes.org/w/index.php?title=California_Doubling&oldid=1718211"
Categories:
Cookies help us deliver our services. By using our services, you agree to our use of cookies.