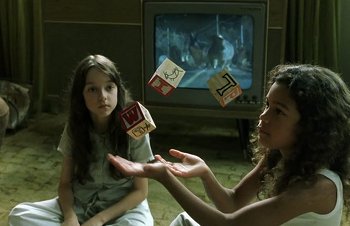 Similar to Child Mage, where children are often adept in magic, kids often have telepathy, psychokinesis, and can see the paranormal. More often than not, girl psychics are used more than boys. This could be for different reasons.

One is that is that it's often considered that children are more sensitive to emotions than adults. Also, girls are probably used more because of the stereotype that they are more emotionally connected than boys.

It may also stem from children might know more than we think, so it sometimes causes Creepy Child and Wise Beyond Their Years characters to have that ability. Psychic powers tend to cause Power Incontinence and emotion related problems since it's one of the powers that are used that they can't control sometimes. This can lead them to be dangerous and may cause everything that's bothering them to be destroyed when they can't keep their emotions in check, making their psychic abilities Psychoactive Powers. Also, they tend to have low life spans and are often fragile. As losing control of their powers may cause them to permanently damage themselves or kill them.

Along with psychic powers, these children might also be able to communicate and see ghost, spirits, poltergeist, and the other paranormal. Because of this, they are often used in teams, to find where they are, eliminate them, or find the cause of suffering for the vengeful ones.

These kids also often used for secret organizations, government agencies, and other groups because of their powers. They can also might be twins and have Twin Telepathy, along with being Creepy Twins.

In RPGs expect them to take on the role as a Mystical Waif or Waif Prophet.

Related to Child Mage, but instead of having powerful psychic abilities, they are good at magic. Also related to Waif Prophet as they are often frail and act as messengers.

Examples of Psychic Children include: