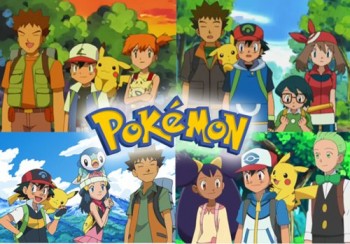 All the groups over the course of the series. [1]

The anime series based on the Pokémon games. Given the success of the games, this series managed to make it to America as part of the marketing push, and, combined with the concurrent American airing of Dragon Ball, helped keep the new wave of Western anime adaptations (which started after Power Rangers) going.

It features the tale of Ash Ketchum and his pals (who change every saga), as well as the perennially ubiquitous Team Rocket trio of Jessie, James, and Meowth, who attempt to steal Pikachu or another rare Pokémon/item nearly every episode and are, with even greater frequency, sent flying sky-high with the Catch Phrase "Looks like Team Rocket's blasting off again! *Ding!*" (at least until Team Rocket Took a Level in Badass in Black and White).

For more info on the many, many characters see the character sheet. Save all character tropes there, not here.

A list of the various movies can be found here.

In 2019, a "Pokémon Kids TV" channel was started on YouTube, with original animation.

Retrieved from "https://allthetropes.org/w/index.php?title=Pokémon_(anime)&oldid=1816139"
Categories:
Cookies help us deliver our services. By using our services, you agree to our use of cookies.