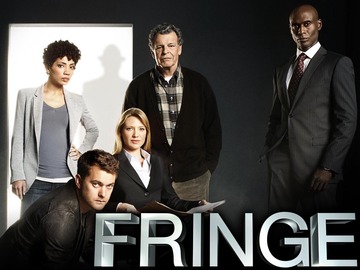 Anyone up for a root beer float?

Fringe is a sci-fi TV series created by J.J. Abrams and ongoing J.J. compatriots Alex Kurtzman and Roberto Orci. Other J.J. coworkers from Lost and Alias are involved as well. In concept, it's like The X-Files, with the primary threat being Mad Scientist terrorists instead of an Alien Invasion. In practice, it is like The X-Files meets CSI.

Like J.J.'s other shows, it has a slowly developing Myth Arc involving an Alternate Universe, an Action Girl, and also has some crazy, off-the-wall happenings right from the get-go. It's quite a Mind Screw. The show premiered in August 2008 on FOX.

WARNING: This page contains a large number of unmarked spoilers. Tropers new to Fringe proceed at your own risk.

Tropes used in Fringe include:

Retrieved from "https://allthetropes.org/w/index.php?title=Fringe&oldid=1883727"
Categories:
Cookies help us deliver our services. By using our services, you agree to our use of cookies.