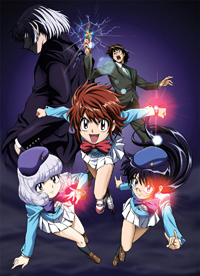 The adventures of a trio of middle-school girls with Psychic Powers and their long-suffering supervisor in a world where those with power are both treated with prejudice and form the most prominent crime-fighting organization in the world, BABEL. Oh, and did we mention the girls are the three most powerful known espers around?

From the creator of Ghost Sweeper Mikami, and animated by the people who brought us Hayate the Combat Butler,[1] this is a fun, entertaining series which is a lot smarter than it first appears. In 2010, the series got an OVA set during the girls' middle school years.

The TV series has been licensed for Region 1 streaming and DVD under the tentative name Psychic Squad. Kaoru, Aoi, Shiho and friends appear in the Massive Multiplayer Crossover game, Sunday VS Magazine Shuuketsu Choujou Daikessen.