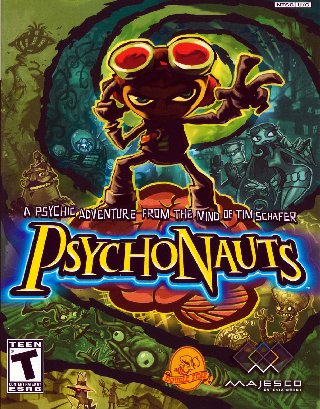 Psychonauts (2005) is a well-loved action adventure game from Double Fine Productions, headed by former Lucasarts employee Tim Schafer. It's the story of a young psychic prodigy named Razputin Aquato ("Raz" for short) who runs away from his home in the circus (an inversion of the usual run away to the circus trope) to sneak into Whispering Rocks, a government training camp for child psychics like himself.

Raz is quickly caught by the camp's leaders, but he's allowed to stay for a while until his psychic-hating dad will come to take him home again. During his one day of training, he discovers that something horrible is going on: someone is stealing the brains of his fellow campers, leaving them mindless zombies obsessed with teeeeeveeeee and hacky-sacking. As he tracks the brain-stealing scheme to the source, he hones his powers, and encounters a variety of eccentric and downright crazy characters. Raz finds himself forced to literally get into their heads and fight his way through their memories and mental disorders in order to save the world.

The platforming aspect of Psychonauts is often made of Bizarchitecture, and some levels—especially the notorious final one—are extremely Nintendo Hard. Luckily, Death Is a Slap on The Wrist: even if Raz loses all of his lives inside someone's mind, the items and events he has already unlocked won't have to be found again.

The game is especially notable for its level of detail. Every line of dialogue in Psychonauts is voiced, and every single character has elaborate voiced reactions to virtually every item, ability or situation that Raz can show them (this is even true for characters who aren't actually around when certain items or abilities are available: hacking the game reveals that the game data has scripted reactions for these things regardless). Additionally, the majority of characters have their own separate plot lines and interactions, many optional cut scenes, and long, hidden conversations that can be overheard by Raz.

Critically praised but initially somewhat poor in sales, Psychonauts is considered one of the great under-appreciated games of its time by many gamers for its unique premise, colorful characters and humorous dialogue. The game is also praised for its visual style, which owes quite a bit to The Nightmare Before Christmas (the credits theme is notably a loving homage to Danny Elfman) and Invader Zim (including Richard Horvitz playing Raz). Overall, the game presents a very inventive and solid world with virtually every character having a strong personality. In recent years, the game has picked up a lot of new fans, and is now available on Steam.

There's a Psychonauts Wiki, the Psycho-pedia at Double Fine.

On November 11, 2010, Schafer indicated he was "ready" for a sequel. On February 7, 2012, Markus Persson, the creator of Minecraft, offered to sponsor Psychonauts 2. At first, he claimed he was serious, but now he's saying he was joking despite the claims of Schafer and Persson discussing the offer.

Psychonauts was once sold as part of the Humble Indie Bundle V.

Psychonauts is the Trope Namer for:
Tropes used in Psychonauts include:
Retrieved from "https://allthetropes.org/w/index.php?title=Psychonauts&oldid=1747743"
Categories:
Cookies help us deliver our services. By using our services, you agree to our use of cookies.