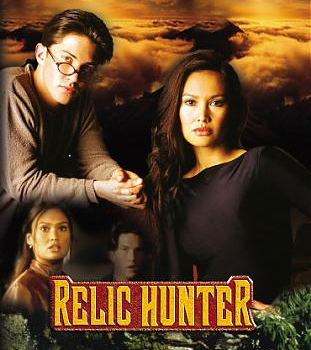 "Welcome to Ancient Studies. I'm not really a stickler for attendance, from time to time I'm called away from the classroom myself."
—Sydney's Season Two pre-credits introduction.

Relic Hunter was a television series that ran for three seasons in Syndication from 1999-2002. Relic Hunters are adventurers who travel the globe to track down lost or stolen objects and return them to their owners or donate them to museums, sometimes for a fee but never working entirely for profit - unless they're this week's bad guy who'll get their comeuppance at the end.

The tough girl heroine, Sydney Fox (Tia Carrere), is a renowned Relic Hunter but also has a day job as a university professor of Ancient Studies which she is somehow never fired from despite taking a ridiculous amount of unscheduled time off to Relic Hunt (occasionally Lampshaded by a boss who complains Sydney is never in). Her Hugh Grantesque teaching assistant Nigel Bailey (Christien Anholt) accompanies her on hunts and largely gets used as the comic relief, whilst secretaries Claudia (seasons one and two) and Karen Petruski (season three) hold the fort back at Trinity College. The latter two were respectively played by Lindy Booth and Tanja Reichert.

The show sometimes features bursts of cheesy dialogue and various national stereotypes and all violence is carefully filmed around with no visible blood for reasons of transmission time.

Tropes used in Relic Hunter include:
Retrieved from "https://allthetropes.org/w/index.php?title=Relic_Hunter&oldid=1141405"
Categories: