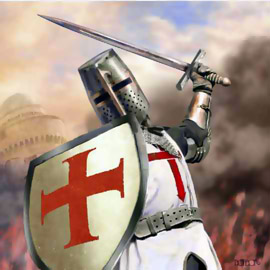 You know better than to mess with them. [1]

The Poor Fellow-Soldiers of Christ and of the Temple of Solomon a.k.a. the Order of the Temple a.k.a. simply The Knights Templar were a Christian religious order founded during The Crusades. Originally established to protect pilgrims on their way to the recently conquered Holy Land, it soon became a major banking institution of unprecedented power and so well respected that even the Muslims trusted their money with them. However, after the Holy Land was taken back from Europeans, the order's original purpose was lost.

The end came when they incurred the envy of King Philip IV of France, who had seen the amount of money and lands the Templars had at a time when the order was sheltering him from his enemies -- money and land that the king now wanted for himself. He started a campaign of defamation against the order, accusing the knights of all of sorts of heretical acts, from sodomy to worshiping cats to selling the Holy Land to the Saracens. Finally Pope Clement V (considered by most a French puppet, whose election Philip had engineered after the death of the previous pontiff, Philip's bitter enemy, Boniface VIII) had the order (illegally) disbanded and hundreds of Templars tried and burned. Outside of France, however, most of the Templar knights were adjudged innocent and were taken under the wing of their old rivals, the Hospitallers, while others managed to find sanctuary in the Iberian Peninsula by forming or joining new orders such as the Order of Christ in Portugal and the Orders of Monetessa and Santiago in Aragon and Castile.

The Knights Templar were skilled, pious, and occasionally highly educated elite fighters, cavalry, and bankers. The order was all in all a fairly normal (if vastly successful until its demise) religious warrior class born from the upper crust of medieval society. Ironically enough, they only embodied the Knight Templar trope in their early days; within a few decades after their beginnings they had transformed, in the eyes of their more zealous contemporaries, into a notoriously tolerant organization that cultivated diplomatic contacts with the Muslim world; worked with Arab architects (which influenced the Gothic architecture seen everywhere in Europe), merchants, and even theologians; and disapproved of slaughtering enemies if they agreed to surrender. All of these points were used against them during the trials against them staged by Philip IV.

The fact that the order ceased to exist effectively overnight, and that they're associated with a huge treasure trove, has since given rise to countless Ancient Conspiracy theories, but anything more is best left to, say, The Other Wiki. The fact that the Order was disbanded on Friday 13th (October 13, 1307, to be precise), is often erroneously cited as the origin of the belief that Thirteen Is Unlucky.

Trope Namer of Knight Templar, Knight Templar Parent, and Knight Templar Big Brother. Compare equally famous Military Orders The Teutonic Knights and The Knights Hospitallers. See also The Illuminati. Given that those on the receiving end of the Knights Templar's missions seldom like it, they are also a fairly frequent target of Take Thats, including Religion Rant Songs. They seem often to be pitted against The Hashshashin.

The Knights Templar provide examples of the following tropes:
Works featuring historical Templars (or their successors):

Retrieved from "https://allthetropes.org/w/index.php?title=The_Knights_Templar&oldid=1693062"
Categories:
Cookies help us deliver our services. By using our services, you agree to our use of cookies.