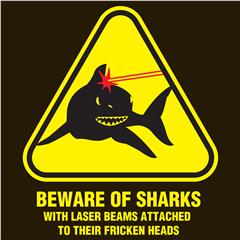 "You know, I have one simple request. And that is to have sharks with frickin' laser beams attached to their heads! Now evidently my cycloptic colleague informs me that that can't be done. Can you remind me what I pay you people for? Honestly, throw me a bone here."
—Dr. Evil, Austin Powers: International Man of Mystery

"Cooool! You mean I actually have frickin' sharks with frickin' laser beams attached to their frickin' heads?!"
—Dr. Evil, a few movies later.

The most prominent type of Ray Gun these days.

When you turn on a Laser Sight, it immediately shows up on your target. This is because it's a laser and moves at the speed of light. So wouldn't you think a laser weapon would also (effectively) immediately hit the target? Logically, yes; but this is TV, where Hollywood Science rules. Thus, energy weapons move a lot slower than the speed of light (and a lot slower than bullets in the same show) and can be dodged after they are fired. Occasionally, it's explained by the dodger seeing the person aiming at them and going for the trigger, and moving in the split-second before they pull it. Also don't expect the lasers to do more than make victims stumble backwards a few feet, unless of course the targets are inhuman or just really not all that important.

Speaking of knockback, an Energy Weapon in fiction will always have knockback (which is usually okay) and recoil (which makes no sense at all), in spite of the fact that light has negligible momentum. Finally, regardless of a laser's frequency and the medium it's shooting through, it will make futuristic zap noises and be visible (and glowy).

Most of the complaints about laser weapons not behaving like real lasers are because their primary function in TV are not to be realistic depictions of how real energy-based weapons would work. They are merely stand-ins for "real" guns to appease media watchdogs, to establish a show as being futuristic, or simply applying the Rule of Cool. In fact the usual "laser bolts" effect looks a lot more like machine gun fire using tracer bullets (which was even colored according to nation, as in Star Wars) and early writers' World War II experiences may have inspired the effect.

There actually are "real lasers" in weapons research and development—like the Airborne Laser and THEL. These lasers are supposed to burn through targets (like missiles) and cause their fuel/warhead to explode or their airframe to disintegrate when it hits, although this is also a continuous beam and requires some time to work. Solid-state pulsed lasers are also in development, which fire bursts of energy and are lighter than fluid-based lasers, but harder to cool. Not to mention that the heat from a powerful laser wouldn't just burn through clothing or make a neat, bloodless, pin-sized hole. There's a common misconception that laser beams cauterize wounds, but real laser wounds are every bit as bloody as knife wounds. It can also cause the water in the body to boil, expand and rip the surrounding tissues apart, much like a high velocity bullet impact. There are also electrolasers under development, which ionize the air so that electric current can be sent along the beam's path. Ironically, all of these characteristics make lasers far more effective as weapons than their portrayal in most fiction, which is in fact the main reason that the military is developing them in the first place. It's also probably the main reason we're not likely to see realistic laser weapons in children's shows.

Incidentally, plasma weapons fire really hot gas; this is different from lasers, which are light beams. Necessarily, plasma weapons can't use light speed projectiles as, having mass, they would be susceptible to all sorts of physics that make approaching the speed of light extremely difficult. Practically a trope in and of itself, plasma weapons are almost always depicted as producing ludicrous glowy puffballs (often green) that somehow avoid mixing into the air, sometimes hand waved as magically autogenerated magnetic containment.

For those keeping score, the title of this trope comes from an otherwise unrelated line in the first Austin Powers movie. For really frickin big laser beams, see Wave Motion Gun. For real handguns Bowdlerised into energy guns, see Family-Friendly Firearms. If it's Raygun Gothic, it's probably a Death Ray. When such weapons are used excessively, see Beam Spam. Often overlaps with Hand Blast for the user's convenience.

Occasionally misspelled "lazer" in fiction, commonly to differentiate from actual LASERs. Frequently misspelled "lazer" in Real Life, because people are dumb, or because it's easier to trademark names that aren't real words. In reality, the name "L.A.S.E.R." is an acronym of "Light Amplification by Stimulated Emission of Radiation", since that's what lasers do. It helps that, by happenstance, the acronym "LASER" makes for a cool-sounding name.

Examples of Frickin' Laser Beams include:

Epsilon Church: I am not a thing! My name is Leonard Chuch and YOU WILL FEAR MY LASER FACE!

Kid: What are you gonna do? You're just a kid.
Superboy:(zaps the ground by their feet with his heat vision) I'm the kid with laser beams comin' outta his eyes. (the kids flee in terror)

Tallest Purple: Why is everything lasers with you?