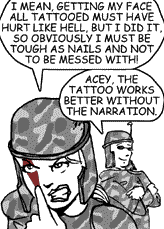 Unless, of course, you are Lampshading it for laughs.

This is a writing or directorial choice that involves the use of character behavior, rather than blatant or thinly-veiled narration, to establish narrative elements.

For example, say Alice is a Badass:

If you're using a story structure or Point of View that doesn't include a narrator (such as limited third-person, in which you only see into the head of one character), showing is a far better idea, if only because having a narrator suddenly show up just to tell this stuff would break the reader's Willing Suspension of Disbelief. It's even more important in a visual medium, since people don't tend to say precisely what they're thinking or how they feel about it for a hypothetical audience's benefit; watching two characters discuss the details of something they both already know rather than making economical use of a flashback to when one or both didn't know is extremely poor storytelling.

This also relates to sentence-by-sentence writing decisions that have more to do with an author's language and word choice than anything else. In general, something happens in every sentence written. Is the author merely stating those events, or describing them? "Alice was angry and upset over Bob's death" is the telling version of "Alice's heart raced as her husband slumped to the floor, blood gushing from his throat." One of these two sentences has slightly more dramatic power, and it's for reasons of impact that showing is generally advocated over telling.

Now this line is sometimes quoted as an absolute gospel truth, which is not really true. It's certainly a good habit to get into (particularly in character writing; nobody likes being told what they're supposed to think of someone), but it's not an ironclad rule, and knowing when to break it to quickly explain minor details is a major aspect of learning to write. One of the best times to Tell something instead of Show it is when you want to summarize a long period of time—the written equivalent of a Time Passes Montage. Some times, one might Show so much that it becomes Too Much Information.

An extension of the concept in interactive media like Video Games is "play, don't show." Rather than the player being told that the Dragon Lord killed your ninja clan and dishonored you by defeating you in a duel or being shown a movie sequence, the player is allowed to act out the journey to the Doomed Hometown and fight a hopeless duel against his far more powerful foe prior to the game proper.

Rush named one of their songs after this concept.

Showing instead of playing