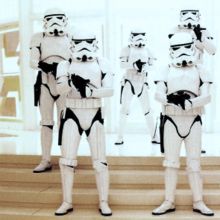 A slang term for the hordes of standard-issue, disposable bad guys whom the hero mows down with impunity. It's a thankless job, to be sure, especially in Real Life, but somebody's gotta do it.

Also called "goons," "scrubs," "drones," "small fries," "flunkies," "pawns," "crunchies," "popcorn," "grunts," "minions," "lackeys," "underlings," "henchpersons," and "Cannon Fodder". Nameless, faceless, horribly awful shots, incompetent, unwilling to retreat, and completely disposable: they provide a chance for the characters to show off their flashy fighting skills and can be shot without guilt. The hero might find it in his heart to Save the Villain, forgive him, even accept him into his inner circle, but the guys whose only crime is not finding a better employer will be shown no mercy. Next to Punch Clock Villain, but usually more faceless, this is one of the tropes most liable to Just Following Orders, a fact that may be pointed up in order to reduce Moral Dissonance about their disposability.

The term "mook" when used in this context comes from Hong Kong Cinema, and takes its name from the mook jong, the wooden training dummy used in Wing Chun, whose only function is to get hit (and hit hard). In Hong Kong movie circles, they're often called "three-hit men," in reference to how many hits it takes to knock them out, though the actual number of hits varies.

It's rarely explained just why they're willing to fight and die for villains who want to destroy the world, or what they get in return. Their life expectancy stinks, and you have to wonder why they took the job in the first place. Depending on just who/what they are fighting for, the plausibility of this can vary.

Despite all this Mooks play an important role, as without someone to fight, your action movie/show/or game would have a lot less action. And if every bad guy your hero runs into is a badass, then The Dragon or the Big Bad would just feel like same old same old. Mooks help provide that in-between by keeping things lively, without diluting The Climax or the big showdown with the Dragon just before the climax. In Video Games, they may also double as a ready source of Experience Points, gold, and recovery items for the player.

Sometimes Mooks will serve as comic relief rather than presenting an actual menace (having their jeeps flipped in the air, getting caught in their own traps, etc.) The Trade Federation droids in the Star Wars prequels are a good example here.

Not to be mistaken with a certain racial slur, or the tentacled aliens from the MOTHER series (although they themselves qualify).

This trope is the Evil Counterpart of the Redshirt Army, which are Mooks on the good side. Similar to but not to be confused with their non-combat brother Evil Minions (likewise the Redshirt Army with the Red Shirt). Occasionally, it turns out they were Good All Along.

In Video Games, mooks tend to be slightly more powerful, and able to at least hurt the hero, if not kill him a few times. However, 9 times out of 10, the hero has a Healing Factor (more often objects used to heal than spontaneous healing) while the mooks stay hurt forever. Also, while the hero can restart if he/she dies, the mooks (usually) only die once per level, and when the level is restarted, they usually do the exact same thing they did before.

If they're lucky, mooks may very occasionally get promoted to the status of a more major villain. The heroes may also be able to persuade them over to the good side, in which case they have performed a Mook Face Turn. Humanizing mooks is a basic technique of Deconstruction. In some Video Games, certain kinds of mooks will have a special introduction when they appear for the first time.

Armies of mooks are not always but usually overwhelmingly male. Typically, killing or harming even one nameless female tends to twist an audience's sympathies differently than the effect of the same to a male. As your protagonist escapes the fortress of doom, you don't want the audience worrying about the mooks being taken out or hurt.

When supposedly elite fighters in large number are less competent together than a man alone, it's Conservation of Ninjutsu.

Note #1: With respect to media (particularly anime), a "mook" can also refer to a Japanese publication which is a hybrid of a magazine and a book.

Note #2: It's also a mostly obsolete racial slur against Italians, so use with caution.

Examples of Mooks include:

Retrieved from "https://allthetropes.org/w/index.php?title=Mooks&oldid=1676613"
Categories:
Cookies help us deliver our services. By using our services, you agree to our use of cookies.