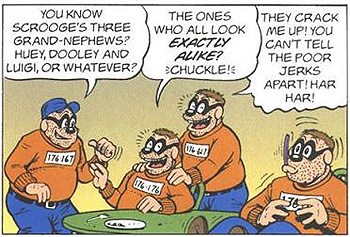 That Beagle Boy on the right has a toothbrush in his mouth because one of the others confused him for himself.

A type of gag not limited to but most prevalent with sitcoms and children's comedies. Basically it goes like this: A) A character openly makes some kind of statement or declaration and then does the exact opposite. B) A character accused of engaging in a certain behavior or activity denies it before being immediately depicted engaging in the very behavior or activity they just denied. C) One character criticizes another character for some fault that is an established part of their own characterization, or just before or after exhibiting that particular fault themselves. D) A character makes fun of a group of people which he himself happens to be a part of.

For example, an overweight girl deep in denial might say, "I don't see why you guys think I have an eating problem"... right before taking the first bite out of her fourth consecutive Big n' Tasty. Or a man might exclaim, "What are you talking about? I'm not greedy"... and then swipe clean every last cent in the Take-a-Penny-Leave-a-Penny tray.

It doesn't even have to necessarily be the character who does the opposite. Half the time it seems like the entire universe is instantaneously altered just so the polar opposite of the character's sentence occurs for a gag. If a character is lying to his or her parents and says that they didn't go to that concert last night, sure enough, the phone will instantly ring and the answer machine will broadcast a friend instructing them to call back, raving in great detail about how much fun they had at the concert, how glad they are that they snuck out and how there's no way their parents will ever find out.

Often evident (and occasionally Truth in Television) when one character prematurely accuses another character of engaging in Double Entendre or sexual innuendo, thereby indicating that their own thought processes are following the same "perverted" channels. It drives the point home if the accusing party speaks before the accused makes the connection or if they wouldn't have made it in the first place.

The delivery of hypocritical humor in reality-bending situations is usually executed via Contrived Coincidence.

Compare with Boomerang Bigot, Tempting Fate, I Resemble That Remark, I Would Say If I Could Say, Such a Phony, and Description Cut.

Some tropes, like Sorry, Ociffer..., Some of My Best Friends Are X, and Complaining About Things You Haven't Paid For, inherently lend themselves to Hypocritical Humor.

Not to be confused with Hippocratic Humor, which would be what House, M*A*S*H, and Scrubs is all about. Also don't confuse with Hypocritical Heartwarming.

Please do not attempt to add examples of people doing this unintentionally (nearly all Real Life examples would fall under that). This trope refers to deliberate uses of hypocrisy for humor's sake, at least by the writer. The same goes for Wicks and Pot Holes, so if you catch any, feel free to destroy them without pity.

Examples of Hypocritical Humor include:

Retrieved from "https://allthetropes.org/w/index.php?title=Hypocritical_Humor&oldid=1945591"
Categories:
Cookies help us deliver our services. By using our services, you agree to our use of cookies.