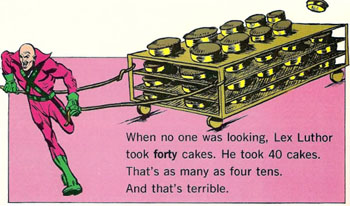 Dude, you're like the richest man in Metropolis. Can't you just buy some cakes?[1]

When the bad guy's acts are unquestionably evil, but the show's writers feel the need to have characters say this out loud. Frequently a sign of a Designated Villain.

This is often a case of Anvilicious. Named for a page from The Super Dictionary, where even though we see that Lex Luthor has stolen forty cakes, the panel still reminds us, "And that's terrible."

If they're established as bad by an actual action, see Kick the Dog and Moral Event Horizon. If this is used as most of what is supposed to make the villain bad, it's Offstage Villainy. You're Insane! can often be used as an alternative.

A Sub-Trope of Show, Don't Tell. Might be justified if the villain in question is edging toward Draco in Leather Pants territory.

See also There Should Be a Law, Captain Obvious, That Makes Me Feel Angry, And That Would Be Wrong, Captain Obvious Aesop, Informed Wrongness, and What Do You Mean It's Not Heinous?. Contrast This Is Wrong on So Many Levels.

Examples of And That's Terrible include:

Retrieved from "https://allthetropes.org/w/index.php?title=And_That%27s_Terrible&oldid=1561507"
Categories:
Cookies help us deliver our services. By using our services, you agree to our use of cookies.