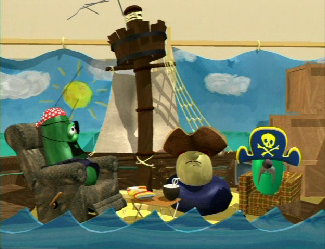 Their favorite hobby is vegetating.

They don't pillage. They don't plunder. They certainly don't rape. They don't invade Port Towns, kidnap beautiful maidens, battle the Royal Navy on the high seas, broadcast without a license, or swap files on the intertubes... and they've never been to Boston in the fall. The Pirates Who Don't Do Anything, in fact, seem to mostly just drift aimlessly on the high seas, drinking rum and possibly singing sea chanteys. If you ask them, they'll probably just tell you they like the way it looks on their resume. Or maybe they'll just tell you, "We don't do anything."

In general, a member of The Pirates Who Don't Do Anything is any character who, despite having a certain canonical job, is rarely seen engaging in that job. They might indeed be a pirate who rarely goes out and steals treasure and raids ships—but they might just as easily be mobsters who don't steal or smuggle, students who don't go to class, office workers who never seem to do more than hang out in bars, or ninjas who just didn't get the memo about that whole "stealthy assassin" thing.

This may be because writers and fans are in love with the romanticism implied in a life of adventure and crime, but don't want to actually show the characters doing any of the myriad of things that makes thieves, assassins, mercenaries, bounty hunters, and other unsavory types pariahs in Real Life. This can result in a strange dissonance where the friendly, messianic nature of the characters is at odds with the openly predatory nature of the professions they claim to engage in. May bring A Million Is a Statistic into play.

It could also be a bit of an attempt to dodge the tedium of portraying someone working a day-to-day job, especially if the writer doesn't know how that job really works. This wouldn't really pass in a Slice of Life type work, however (unless, of course, the character is suffering from a long-term illness and can't go to work).

A subtrope of Informed Ability. See also One-Hour Work Week and What Exactly Is His Job?. Contrast (in every possible way) Royals Who Actually Do Something. Also contrast (in a different way) with The Main Characters Do Everything, where characters actually go implausibly far beyond what is required or indeed allowed by their job description. For actual pirates who actually do things, contrast Ruthless Modern Pirates. A Transplanted Character Fic usually turns the cast into these.

The trope name comes from one of the "Silly Songs with Larry" from Veggie Tales (later covered by Relient K) which is about - well, pirates who don't do anything. It later provided the title and theme music for a Veggie Tales movie.

Examples of The Pirates Who Don't Do Anything include:

Retrieved from "https://allthetropes.org/w/index.php?title=The_Pirates_Who_Don%27t_Do_Anything&oldid=1949523"
Categories:
Cookies help us deliver our services. By using our services, you agree to our use of cookies.