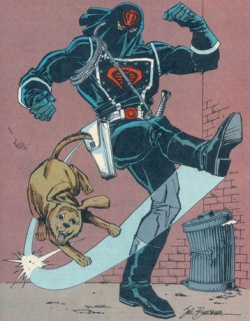 A character performs an act so casually cruel or evil that you know that they are scum, incompatible with the moral rules of the series that they're in. This is a signal to the audience that it's okay to dislike the character. In short, dog-kicking is a sure sign that the writers want the audience to be wary of this character, even if he is nominally one of the good guys.

What separates this trope from other evil or cruel acts is that not only is the act bad, it's also pointless as far as the plot goes. It is the fact that it had no other point than to be evil, that puts them on the bad side of the Rule of Empathy.

Dog-kickings can be verbal as well, when a line of dialogue is used to shock the audience with its sheer repugnance. If it's uttered in the presence of the hero in an action series, he'll echo the audience's thoughts and tell the villain "You're Insane!"

This trope isn't about literal dog-kicking. It's any act or statement that shows the character's meanness or out-and-out evil, such as a boss demanding an employee come to work during Christmas when the employee's kid is in the hospital, or stealing from a blind beggar's coin dish, or a vicious No-Holds-Barred Beatdown on the hero or one of his True Companions or Protectorate. A Politically-Incorrect Villain can kick the dog by showing gratuitous racism, sexism, homophobia, etc... or some combination of such non-PC traits.

If an animal is used, however, a dog is usually the pet of choice, partly out of connotations of blind loyalty, partly from tradition. Arguably, however, substituting a cat can be even more shocking. After all, even bad guys like cats. So, the argument goes, if someone goes out of his way to harm one, they must really be a bastard.

This trope is common in horror-based Monster of the Week shows, often to set up the Asshole Victim for the Karmic Twist Ending. Anthologies are especially prone to this, as they have to set up their villains really quickly, since they only have one episode to tell their story. This can be played up by having the very same kick of cruelty be the cause of their downfall. At the very least, it is designed to let you know who is going to lose at the end. The opposite of Karma Houdini.

In cartoons, someone who does this can be legally harassed by Bugs Bunny, Daffy Duck, the Warner Brothers and their Sister Dot, etc. The Screwy Squirrel, however, doesn't need one of these.

If what is supposed to be a character's Kick the Dog moment is excessively horrible, cruel, or otherwise despicable enough to make an audience lose all sympathy for him, then he's crossed the Moral Event Horizon, rather than kicking the dog if he's not on the other side of it already. If the Dog in question is someone the character cares about and discovers Being Evil Sucks, then they've Kicked The Wrong Dog and might be in time to avoid a Face Heel Turn. If the dog belonged to a minion, expect it to help cause a Mook Face Turn because Even Mooks Have Loved Ones. On occasions, if karma works in the dog's favor, he'll manage to get a last laugh. On even rarer occasions, after being pushed around too many times, the dog may decide to plan against the Big Bad for his own ambitions, because Being Tortured Makes You Evil. When the dog-kicking is done in a way that (usually inadvertently) increases sympathy for the villain, it becomes Straw Man Has a Point.

A more benign, and more comedic, form of this shows the immorality of the villain by having them cheat at Solitaire.

Compare with Can't Get Away with Nuthin', And Your Little Dog, Too, Kick Them While They Are Down, The Dog Bites Back, Threw My Bike on the Roof, I Will Punish Your Friend for Your Failure. See "If You're So Evil Eat This Kitten" for when bad guys do a Kick the Dog test to make sure undercover heroes are really evil.

Contrast Pet the Dog (proving you're good) and Adopt the Dog (going from Neutral to Good).

Not to be confused with Shoot the Dog. (That's what you do when Old Yeller gets rabies.)

See Kick the Son of a Bitch for when it's less of a dog and more of a, well, you know.

Examples of Kick the Dog are listed on these subpages:

Retrieved from "https://allthetropes.org/w/index.php?title=Kick_the_Dog&oldid=1773129"
Categories:
Cookies help us deliver our services. By using our services, you agree to our use of cookies.