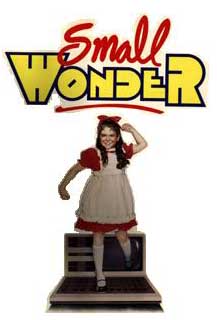 Short Version: That show you vaguely remember about the terrifying robot girl in the French Maid outfit.

This Fantastic Comedy aired in first-run Syndication in the 1980s. Ted Lawson, a robotic engineer, had a family like any other in California, except that his daughter, Vicki, was a robot he designed and built. Ted, his wife, Joan, and their son, Jamie, continually tried to keep Vicki's identity a secret. This was no easy task, since Ted lived next door to his gloryhound boss, whose daughter wanted to be Mrs. Jamie Lawson.

The series is often derided for its silly premise and uneven episode plots, some of which were downright uninspired. Due to popular demand, however, Shout! Factory released the first two seasons of Small Wonder on DVD in the first half of 2010. The series' star, Tiffany Brissette, has retired from acting to avoid typecasting. More information about the show is at the Semi-Official Small Wonder "Cabinet of Contents" Home Page.

Tends to be confused with Out of This World, which is that show you vaguely remember about the alien girl who could freeze time.

Tropes used in Small Wonder include:
Retrieved from "https://allthetropes.org/w/index.php?title=Small_Wonder&oldid=1826218"
Categories:
Cookies help us deliver our services. By using our services, you agree to our use of cookies.