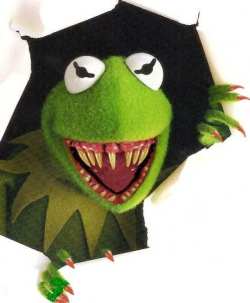 It's not easy bleeding green!

Take a popular character and introduce us to the evil version of this character. Naturally, it's a favorite Soap Opera device. It's also very prevalent in genre shows, where the events may happen in an Alternate Universe: for example, the Wishverse in Buffy the Vampire Slayer, or the Star Trek Mirror Universe. Typically the Evil Twin will be portrayed by the same actor as the regular character.

It's worth noting that in the overwhelming majority of cases the twin is evil; only rarely does an evil character suddenly find themselves contending with a good twin, and in those cases the good version is often simpleminded or purely comic. See Good Is Impotent.

Often, in science fiction, the Evil Twin is often created from the original character by Applied Phlebotinum. Most of the time, this results in a "Good Twin" and "Evil Twin", neither of which are complete entities on their own. See Starfish Character for examples of this.

A goatee or other beard is a staple of Evil Twins everywhere. This comes from the Star Trek: The Original Series episode "Mirror, Mirror", in which the evil duplicate of Spock is distinguished only by the fact that he has a beard. It is common for parodies of Evil Twin to use a beard as a distinguishing characteristic, in some cases even when they shouldn't be able to grow facial hair - for example, Flexo in Futurama or Cartman in South Park. Some evil twins use Identical Twin ID Tags to differentiate from their good counterpart such as scars and evil costuming.

Compare Criminal Doppelganger, Evil Counterpart, and Enemy Without, and see also Doppelganger. For the situation where the original character pretends to be the Evil Twin, see Impersonating the Evil Twin. When multiple characters' Evil Twins team up, they become The Psycho Rangers.

If they are literal twins, they might be Cain and Abel and/or Separated at Birth, but an Evil Twin need not be a relative of the original, and a separated pair doesn't necessarily include an evil one.

If the two end up fighting, it is always a Mirror Match.

Occasionally Played for Laughs when both twins are evil.

If you were looking for the videogame Evil Twin: Cyprien's Chronicles, it can be found here.

Examples of Evil Twin include:

Hoo boy. Let's say it's popular, and even more so if the base subject has a Mirror Universe or an Evil Twin as part of its own canon.

Retrieved from "https://allthetropes.org/w/index.php?title=Evil_Twin&oldid=1952651"
Categories:
Cookies help us deliver our services. By using our services, you agree to our use of cookies.