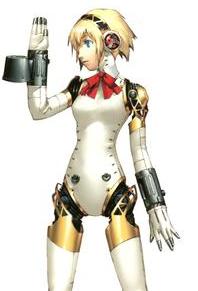 Body of titanium, heart of gold.

She's gorgeous, she's sexy, and she's got a 50,000-mile warranty. She's the Robot Girl, a staple character type in anime. Most commonly found in science fiction and Sentai shows, but not exclusively. Despite their artificial nature, Robot Girls are never—well, hardly ever—sexless; they are at the very least cute as hell, and more often drop-dead gorgeous, if not outright seductresses. (Robotic males, on the other hand...) Despite how cute or sexy she may be, though, the Robot Girl is often a dangerous opponent in a fight, even if they're only created to do common household chores.

The robot girl is not necessarily a completely mechanical creation—the character type can encompass cyborgs, bioroids and even virtual beings.

While not unheard of in American shows (My Living Doll, Small Wonder, Mann and Machine) the robot girl on American TV tends to be a gimmick or MacGuffin on which to hang a series concept rather than a character type in its own right.

Of course, Japan being the worldwide leader in consumer electronics, androids are quite popular in that country. These androids could be male, but due to the fandom's preferences, most of them are sleek, sexy females. (Technically they would be gynoids, if you're the kind of person who cares.)

Sometimes the character is shown to be an android by some unusual accessory to cue the audience. Due to the popularity of To Heart's Multi, having antennae-like ears is almost universally understood (although, like the character in this picture, visible mechanical joints are another dead giveaway).

Very often an Innocent Fanservice Girl. After all, why in the world would a drop-dead gorgeous female facsimile have any conception of chastity, much less modesty, programming notwithstanding? If the Robot Girl is the lead female or at least an important one, this innocence and naivety can be a large part of their character or even the theme of the work.

Occasionally, even if the robot girl is initially depicted as totally emotionless and incapable of compassion, empathy, humor or love, often such traits - or the simulation of such traits - will begin to sneak in. Examples of this have included Cameron from Terminator: The Sarah Connor Chronicles, Eve Edison from Mann & Machine and Rhoda from My Living Doll. Unless, of course, the robots are programmed from the start to simulate—or even genuinely experience—emotion, such as the Cylons from the 2004 version of Battletar Galactica or the Replicants from Blade Runner.

Examples of Robot Girl include:

Retrieved from "https://allthetropes.org/w/index.php?title=Robot_Girl&oldid=1913939"
Categories:
Cookies help us deliver our services. By using our services, you agree to our use of cookies.