The Legend of Zelda: Four Swords

Everything About Fiction You Never Wanted to Know.
(Redirected from The Legend of Zelda Four Swords)
Jump to navigation Jump to search 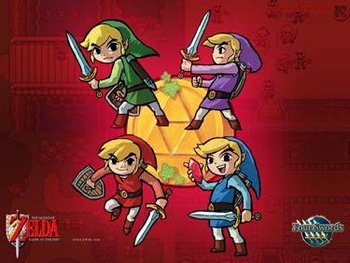 The story for the game, though not terribly important, involved the wind sorcerer Vaati, who had been sealed away before, escaping from his seal and capturing Princess Zelda. Link obtains the Four Sword and uses its magic powers to split into four copies of himself (green, red, blue, and purple). The four Links must work together to defeat their foes in the various areas and make their way to the final fight against Vaati. Of course, there's plenty of room for competition as well as cooperation.

Four Swords was rereleased in 2011, unattached to Link to the Past, for DSiWare download as part of Zelda's 25th anniversary. Besides the advantages of being on a system with built-in wireless multiplayer (the GBA had to use link cables), this edition also includes a single-player mode. The single-player mode only features two Links and gives players control of both by using the X button to call the second Link to the first one (after which the second Link follows the first one and manipulates objects with him) and the L and R buttons to separate them and switch between them. Although the first Link is always green in single-player mode, players may choose which of the three colors the second one is, and this can be changed anytime the game is loaded rather than being permanent. (Multiplayer mode lets you use the X button to call for help, though the other Links don't have to respond...)

Tropes used in The Legend of Zelda: Four Swords include:
Retrieved from "https://allthetropes.org/w/index.php?title=The_Legend_of_Zelda:_Four_Swords&oldid=1730493"
Categories:
Cookies help us deliver our services. By using our services, you agree to our use of cookies.