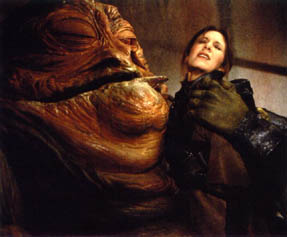 Soon you will learn to appreciate me.

Want a quick and easy way to show what a vile, evil scumbag your villain is? Well, you could have him/her abuse a cute little animal—or have him/her sexually molest the helpless Damsel In Distress or momentarily disabled Action Girl or Dude in Distress when she/he is at his/her mercy. This can include Terms of Endangerment, unwanted kisses, licking, sniffing, groping, Traumatic Haircut, dressing him/her in skimpy clothing, or even out-and-out trying to rape her/him—though this last one is usually stopped before it gets too far, as the hero generally shows up in time to rescue her/him or she/he finally gets the chance to regain advantage. In shows with a historical/fantasy setting, it can also include attempts to force the heroine/hero into marriage.

This trope is used for two purposes: to emphasize how utterly depraved the villain is, and/or to add a sense of urgency to the hero's efforts to rescue his true love. In the meantime, expect her/him to react with either angry defiance (possibily involving brandishing a Chastity Dagger) or silent, shuddering disgust (no one ever seems to play along in the hope of avoiding more serious harm). Bonus points if the villain is grotesquely ugly/deformed and has a habit of snarling things like "Aha! I have you now, my pretty!" Another stock phrase, which seems to be more popular with Mooks, is "I like a girl with spirit!"

This trope has been a staple of movies ever since the early days of cinema, but it's a lot older than that. There are several examples in Shakespeare's works—most notably, of course, The Rape Of Lucrece, and others going back to Ramayana. Almost always involves a male villain and female victim; the few gender-reversed or same-sex examples tend to play it for comic effect, with some exceptions in Boys Love series and Slash Fics where it's treated as a fodder for easy Wangst and hurt comfort. (Or Fetish Fuel, in some cases.)

An alternative to this trope involves a villain not performing this action even when the opportunity obviously presents itself. This can prove an obvious follow-up to showing a villain as being either a Worthy Opponent or prepping them for a Heel Face Turn. In either case, the heroine might not be relieved at his disinterest. Heck, she may even be offended.

Compare the Scarpia Ultimatum. A Gilded Cage may be employed to "sweeten the deal" for the captive, or the villain may use mind control to get her to cooperate quickly. Something like this is usually on the mind of anyone who orders his Evil Minions to Bathe Her and Bring Her to Me.

See also: Villain Ball, And Your Little Dog, Too.

No real life examples, please; this is a rape trope. Tell the police, not us.

Examples of I Have You Now, My Pretty include:

Retrieved from "https://allthetropes.org/w/index.php?title=I_Have_You_Now,_My_Pretty&oldid=1946117"
Categories:
Cookies help us deliver our services. By using our services, you agree to our use of cookies.