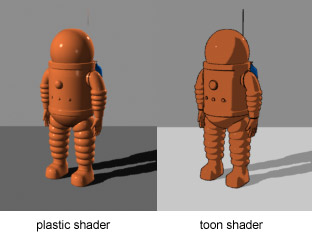 Image by w:User:T-tus, licensed under CC-BY-2.0, with captions added by an unknown person.

Cel Shading is a style of computer rendering that imitates the look of hand-drawn artwork and animation. In layman's terms, it replaces the shading gradient of conventional rendering with flat colors and shadows (as seen at right). The style was pioneered with the Sega Dreamcast game Jet Set Radio, the first game to use 3D polygons to produce a cartoony look.

While the style is not exclusive to Video Games, it is often used there since this was the earliest way to produce a hand-drawn look via computer polygons.[1] In other media, Cel Shading can be useful to render specific items in a hand-drawn production, if a given scene would be too difficult to animate by hand, such as a rotating object or an Epic Tracking Shot traveling down the length of a massive vehicle. There are also animated series produced exclusively via cel shading, usually for similar reasons. When mixing cel shading with traditional animation, it's important to calibrate the renderer to avoid visually clashing with the rest of the production (i.e. being too detailed or smoothly animated).

Be careful when tossing terms around; Cel Shading applies first and foremost to the way the lighting is rendered. Conventional rendering can still utilize solid colors, simplistic textures, and cartoonish caricatures (e.g. The Incredibles or the 3D Super Mario games). Likewise, Cel Shading can be as realistically-proportioned and textured as any hand-drawing. Actual hand-drawn media is never an example, for obvious reasons, nor are cels drawn on computers in a manner similar to convention animation.

The name comes from the cels hand-drawn cartoons were traditionally painted on to. Chiaroscuro is an oft-used visual effect.

Examples of Cel Shading include:

Not cel-shading, but often mistaken for it

Retrieved from "https://allthetropes.org/w/index.php?title=Cel_Shading&oldid=1935285"
Categories:
Cookies help us deliver our services. By using our services, you agree to our use of cookies.