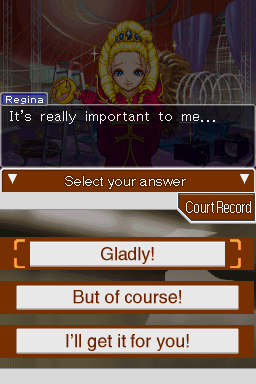 The video game version of You Can't Fight Fate. In video games, the main character has two jobs: in the plot, he is The Hero of his motley crew of rebellious aristocracy, mysterious girls, and many others. He's the leader, the point-man, calling the shots. He's also, however, the player's avatar in the game world. Therefore, it's becoming increasingly common for the other characters to turn to you and ask (in the form of a multiple-choice question and Dialogue Tree) what they should do in any given situation.

The problem, however, is this: The writer already has the script plotted out, and your decision, whatever it is, is going to affect all of jack squat. Either the other characters will just ignore the answer and get on with what you're supposed to be doing, or they'll ask the question over and over until you make the "correct" choice. You might see some altered dialogue or a slightly different scene, but the plot itself will remain largely unchanged. In particularly Egregious cases, such as the page image, the dialogue tree will give you multiple "yes" options but not a single "no".

Occasionally a game utilizing this trope will toss in a question where an incorrect answer results in a Nonstandard Game Over (God knows why). Such questions are usually pretty obvious (the Big Bad asking you to become his disciple, for example), though, so it's easy to avoid falling into that trap. Either way, this represents the game forcing you to Follow the Plotted Line, period.

In some games, particularly in Sierra adventure games, answering a choice incorrectly can leave the game in an Unwinnable state, for example the salesman in Space Quest I, who you have to refuse the first offer from, then wait for him to reappear so he offers you a jetpack, which is critical later on. Guide Dang It!

This trope doesn't apply for games that make heavy use of a Karma Meter, such as the Ogre Battle series, or most western RPGs. In those games, your decisions can and will direct the plot, albeit usually on a pre-programmed branch.

Another way to make these questions relevant is to tie them into Relationship Values—your decisions might not change the plot, but they will change how other characters perceive you.

Named after one of the first instances of the trope, from the original Dragon Quest.

Examples of But Thou Must! include:

Examples where you are forced to give the "right" answer

Examples where giving the "wrong" answer has little or no effect

Examples where there is no "wrong" answer available to choose

Retrieved from "https://allthetropes.org/w/index.php?title=But_Thou_Must!&oldid=1927330"
Categories:
Cookies help us deliver our services. By using our services, you agree to our use of cookies.