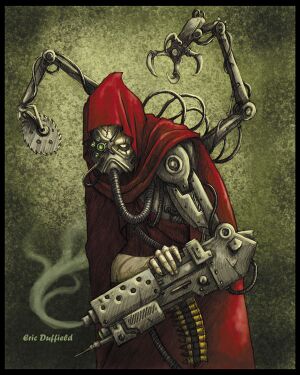 So, you've got a character that you want to show is really dangerous. You could give him/her the normal two arms or legs, but that's just not enough. Maybe you could replace one of those arms with a really big gun, or a sword, or have it transform into something else.

If that doesn't work, you can always give a character extra arms... because four arms good, two arms bad, right?

For obvious reasons, normal humans don't get this treatment, because it would look pretty awkward having to do bodily cleaning...and having four arms to go around would be a tailor's nightmare. If you're a mutant or an evil genius, you don't have to worry about this, because Freaky Is Cool.

Multi-Armed and Dangerous characters come in two flavors: 1) The extra arms are a regular part of the body. 2) They're made from prosthetics/synthetic materials that are usually attached to the person.

They're usually associated with Super Strength. Combat Tentacles are a subtrope. Occasionally you'll see such characters fighting with a weapon for each of their hands. Can sometimes be used as Spider Limbs.

This isn't what they mean, by the way, on the news when they say "The local bank was robbed by four armed men", but "To be forwarned is to have four arms."

It should be noted that recent research shows the (still very expensive) technology that allows a person to control an artificial limb with the same mental process as an organic limb, can be used to control extraneous limbs with only a minimal period of adjustment. It's only a matter of time. . .

Examples of Multi-Armed and Dangerous include:

Kaku: Why does Dr. Octopus get to have all the fun?

Forewarned is half an octopus.