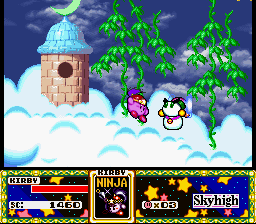 A video game area that takes place on solid clouds in the sky. The characters may be seeking out a landmass or building in the sky, but they also might just be wandering through a huge field of solid clouds. Naturally, not falling to one's death is the biggest challenge of such an area, which can be made worse by the presence of annoying flying enemies. Fluffy Cloud Heaven is often this. It's interesting to mention that already the first sidescrolling platformer - Jump Bug, released in 1981, contained solid clouds.

Named after the stage from Kirby's Dream Land.

Examples of Bubbly Clouds include:

Retrieved from "https://allthetropes.org/w/index.php?title=Bubbly_Clouds&oldid=1483922"
Categories:
Cookies help us deliver our services. By using our services, you agree to our use of cookies.