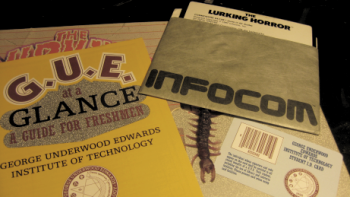 Along with the game disk, you get an orientation guide, an ID card, and... GAAAHHHH!!!

In this age of digital media and Internet deliverables, the idea that 25 years ago people were shelling out $30 to $50 for a 5¼" floppy disk in a cardboard box must seem bizarre and incomprehensible.

Software today tends to come with little more than a disc and a "quick install guide"—often there won't even be a CD jewel case, and sometimes the only thing you get is a file downloaded from the Internet. Yet in those halcyon golden days, things were very, very different. The absolute minimum you could expect with a game was a printed manual, often a thick tome containing instructions, backstory, and even hints.

More than that, if you were buying a game from one of the really notable production houses, you got a variety of Bonus Material known as Feelies. These were real, tangible props, ripped straight from the game world. They were often incorporated into the game's Copy Protection mechanism to make it a little less jarring. Such things are almost entirely in the past now.

Nowadays, game publishers sometimes make "collector's editions" of certain games, which usually means that if one pays extra for the game one gets various feelies and supplemental materials included with the purchase.

See also Revenue Enhancing Devices. Has nothing to do with Brave New World. Not to be confused with the Alternative Rock band of the same name.

Examples of Feelies include:

Retrieved from "https://allthetropes.org/w/index.php?title=Feelies&oldid=1893156"
Categories:
Cookies help us deliver our services. By using our services, you agree to our use of cookies.