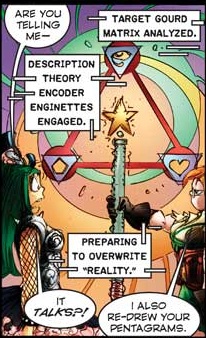 Magic that works. Maybe not exactly the way anyone wanted it to work, but it is not imaginary in the story and you may rely on it to do something. This style of Phlebotinum is sometimes subject to Magi Babble, its own flavor of Techno Babble.

Some possible flavors of Functional Magic:

The highest level of this type of magic is Summon Magic, in which the caster summons the entity itself to wherever he is and bosses it around. As one might imagine, this can easily lead to the entity turning on its would-be temporary master if done wrong, especially if the entity is a demon or some other form of Exclusively Evil. Remember, kids -- Evil Is Not a Toy!

While some magical systems allow it to do practically anything, restricted only by the user's power and imagination, in other systems the magic user is restricted to variations on a theme. Classic styles are:

These styles of magic crosscut the list of ways of doing magic above. While divining is often an inherent gift, there are also examples of pure diviners, unable to do any other style of magic, who see the future through theurgy, rule magic, device magic, or wild magic (or a combination). Whatevermancy is a common naming convention for fantasy magical styles. See Magic A Is Magic A. With all this wonderful diversity, you can expect some snobbish magicians to consider there are Un-Equal Rites. If practicing magic has a spiritual component, it may cross over with Enlightenment Superpowers.

Examples of Functional Magic include:

Retrieved from "https://allthetropes.org/w/index.php?title=Functional_Magic&oldid=1804125"
Categories:
Cookies help us deliver our services. By using our services, you agree to our use of cookies.