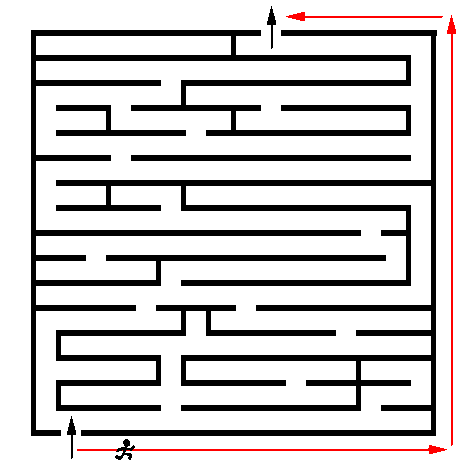 Thinking outside the box.

When a game's development team is designing a game, they often form some specific ideas as to the path the player should take when completing the game. Other ways to progress are usually restricted either by simply not supplying any other options or by placing some sort of impenetrable obstacle in the way of what would otherwise be a valid path. In these ways a path through the game is created. This path manifests to the player as the One True Sequence in which tasks need to be completed.

Sometimes, fans of a game develop ways to complete tasks in an unexpected order, or skip some entirely, contrary to the developer's intentions. Such acts and the attempts to discover them are known as Sequence Breaking.

The act of Sequence Breaking is accomplished in many different ways. Sometimes, the player exploits a glitch or a bug in the game's programming. Other times they play within the intended boundaries, but still manage to accomplish something intended to be impossible (for instance, jumping a fence using an unforeseen combination of abilities and careful timing).

Or you could do it completely by accident. Luckily, this tends to have little effect on the game's story or progress, and you can usually go back and do what you missed.

Some games eschew the linear path design and opt for a more freeform style, like the Wide Open Sandbox. These games are more resistant to forming Sequence Breaker communities in the fan base, and normally don't get them at all simply because there is no sequence to break.

The phrase "Sequence Breaking" is most often applied in the context of the Metroid fanbase, who coined the term. The term has since been applied to many other fanbases of other games.

This is a subtrope of Fake Skill. Contrast Script Breaking, which is often done via Sequence Breaking. Sequence breaking may involve the Dungeon Bypass, which is one typical way of breaking the sequence. Also contrast You Can't Thwart Stage One, which is often literally true even in games that allow sequence breaking; even metroidvanias famous for sequence-breaking opportunities generally require that the first area be traversed or the first item be collected.

Note: We Are Not Game FAQs. Details about specific instances belong there, not here.

Examples of Sequence Breaking include:

Skip to the end..