Screw the Money, I Have Rules 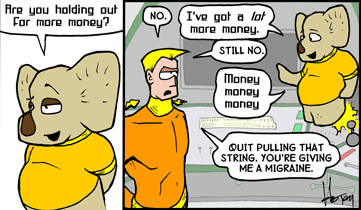 Toldja Tagon had a soul.

For some people, money isn't an issue. Maybe a hero's morals and convictions are so strong that he can never be bought out, not even for all the money and riches in the world. Maybe someone is so committed to a goal he'll spend all the money he has to in order to reach it. Or perhaps there are some people who just don't need the money; the warm fuzzy feeling after doing a good deed is reward enough. Whatever the reason, wealth comes second to personal values.

Note that this does not necessarily mean "wealth comes second to good personal values." This is a very common trope for Knight Templar types, and outright Chaotic Evil villains can enact it too.

Compare Keep the Reward, Honor Before Reason, What You Are in the Dark, Doing It for the Art. The Last DJ is a specific character type who is likely to do this, although he may pay for it, especially in missed opportunities.

Contrast Screw the Rules, I Have Money and Only in It For the Money.

Examples of Screw the Money, I Have Rules include:

There are some people money can't buy. For everyone else, there's Tropercard™. ...Wait, let me try that again...

Retrieved from "https://allthetropes.org/w/index.php?title=Screw_the_Money,_I_Have_Rules&oldid=1796226"
Categories:
Cookies help us deliver our services. By using our services, you agree to our use of cookies.