Everything About Fiction You Never Wanted to Know.
Jump to navigation Jump to search
/wiki/Zooey Deschanelcreator 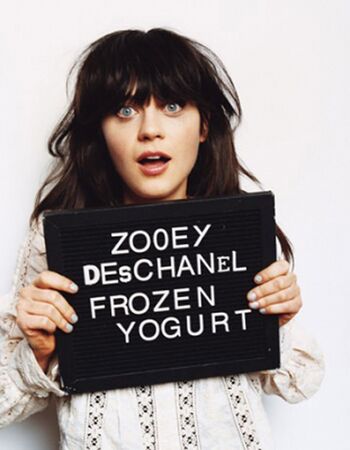 Zooey Claire Deschanel (January 17th, 1980) is an American actress, and if you're watching one of her performances, chances are she's either a Deadpan Snarker, a Manic Pixie Dream Girl, or both. She's acted in Almost Famous, The Hitchhiker's Guide to the Galaxy, Elf, Tin Man, Failure to Launch, The Happening, Bridge to Terabithia, Yes Man and (500) Days of Summer. She also has a starring role in the long-running Fox sitcom New Girl. She will appear on Broadway soon, having been selected by country music legend Loretta Lynn to portray her in a musical adaptation of the movie "Coal Miners Daughter".

In addition to acting, Deschanel is also a talented singer, songwriter and keyboardist, and is one half of the indie folk/indie pop (or as she once described it, "arena folk") duo She & Him (the other half being singer/guitarist/producer M. Ward), and a couple of her movies include at least one scene where she sings. She & Him have made three albums to date, titled Volume One (released March 18, 2008), Volume Two (released March 23, 2010) and A Very She and Him Christmas (released October 24, 2011).

Her father Caleb is an award-winning cinematographer (best known for his work on such films as Being There and The Passion of the Christ), and her mother Mary Jo and sister Emily are both actresses as well, the former best known for playing Annie Glenn in The Right Stuff and the latter as Bones. She appeared as Bones' cousin in an episode of the latter. She also was married to Death Cab for Cutie lead singer/FaceOfTheBand Ben Gibbard from 2009 until 2011.

Not really the sister of Gloria Deschanel.

Zooey Deschanel provides examples of the following tropes:
Retrieved from "https://allthetropes.org/w/index.php?title=Zooey_Deschanel&oldid=1947602"
Categories:
Cookies help us deliver our services. By using our services, you agree to our use of cookies.