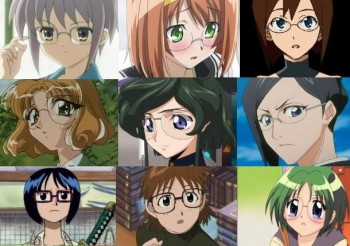 Take your pick, we got these girls in many different flavors![1]

Literally, "glasses girl"—one of the classic "sweet girl" stereotypes in anime. Cute enough without going overboard or posing the threat that a more conventionally beautiful girl might, the meganekko is usually pleasant, smart, and clever. And something about the fact that she needs glasses seems to imply an endearing vulnerability that makes her far more accessible to the average guy. After the Yamato Nadeshiko, she's the second-best girl that a boy can bring home to meet his parents and probably the more realistic of the two. Naturally, as with any stereotype, the meganekko can be inverted or subverted, but the vast majority in anime are sweet, smart and—when found in a major role—usually more than a challenge for a male lead to keep up with. Occasionally she's an unpopular character within the story, but not with the fans.

The glasses are the important part, though. Whether she's Blind Without'Em or not, they are key to her appeal. This is one girl who doesn't need a "Beautiful All Along" transformation; in fact, taking her glasses away is an almost surefire way to reduce her attractiveness!

Sometimes the presence or absence of glasses shows a change in personality, while other times they're a way to give a character a more realistic costume prop.

The Other Wiki suggests we see also "glasses fetishism".

In Western countries this type of character is rarely popular; when she appears, she is often commanded that The Glasses Gotta Go!, although the Shrinking Violet or cute nerd sometimes invoke this trope.

Glasses on a Hot Librarian or Sexy Secretary are a completely different thing. The Seemingly-Wholesome Fifties Girl may use glasses to pretend to be this trope.

Boys with glasses are called Megane, and do not fit into this trope by dictionary definition. Boys cannot properly be called "meganekko"; the term refers specifically to girls.[2] However, girls who wear glasses can be called "Megane", as seen in Azumanga Daioh.

When glasses result in sex appeal rather than Moe, they've got Sexy Spectacles.

Not to be confused with Mega Neko. You know, really big cats. Or Megatokyo.

Examples of Meganekko include:

Retrieved from "https://allthetropes.org/w/index.php?title=Meganekko&oldid=1963785"
Categories:
Cookies help us deliver our services. By using our services, you agree to our use of cookies.