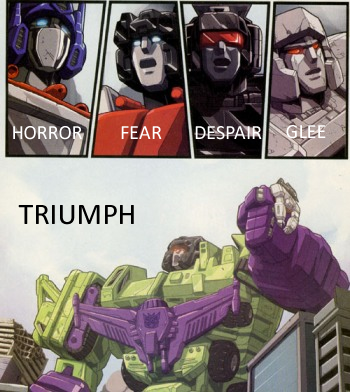 A single vacant expression can convey such a wide range of emotions.

A vague, wispy look of emptiness given by a character that's supposed to convey intense emotional shock, horror, or revelation. Typically the character stands looking vacant with their jaw dropped and is supposed to look like they're astonished about something, but really looks like they've been binging on sedating narcotics for several hours beforehand.

"Dull Surprise" is used so often in cheap work because it's an easy expression to draw. A good artist can be very expensive and in the world of comic-books and animation, you typically get the quality you pay for.

Trope named for a skit in an episode of Mystery Science Theater 3000 where Mike Nelson attempts to guess the emotions portrayed by Kathy Ireland in Alien From L.A.; the correct answer for each was "Dull surprise!" See the skit here. It is also a meme in Transformers fandom, in reference to the art of Pat Lee.

On occasion, this is done intentionally, to indicate the event is not merely surprising, but genuinely incomprehensible, to the point that characters have no faintest idea how to react. This usage typically precedes or is preceded by a Flat What.

Examples of Dull Surprise include:

Retrieved from "https://allthetropes.org/w/index.php?title=Dull_Surprise&oldid=1927655"
Categories:
Cookies help us deliver our services. By using our services, you agree to our use of cookies.